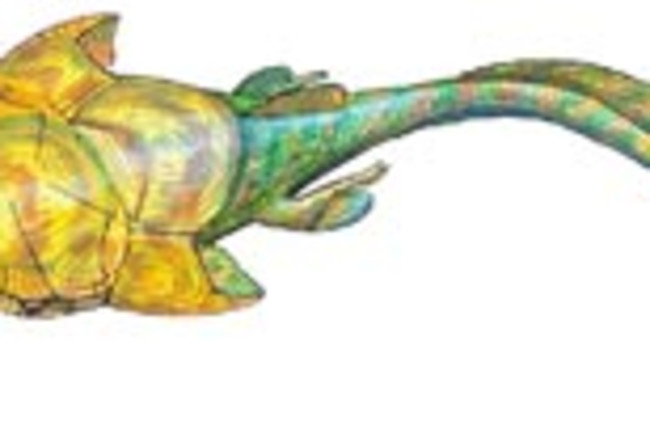 Prehistoric fish had sexual reproduction figured out 380 million years ago, a new fossil study has confirmed. Researchers examined the fossil of one species of armored placoderm fish and realized that the fossil showed a 2-inch-long embryo within the fish's body cavity, indicating internal fertilization, or sex as we know it. Palaeontologist Zerina Johanson says:

"We expected that these early fishes would show a more primitive type of reproduction, where sperm and eggs combine in the water and embryos develop outside the fish. This discovery is incredibly important because evidence of reproductive biology is extremely rare in the fossil record" [Telegraph].

Researchers originally thought the tiny bones within the fossil were the remains of the fish's final meal, but they decided to reexamine the 380-million-year-old fossil after discovering embryos in the fossilized remains of another species of ancient fish last year. A closer look revealed that the placoderm also had a bun in the oven, says lead researcher John Long.

"We could see that the new specimens had the same bone structure as the previous embryos, were the same species as the adult, they did not have any broken or stomach-etched features (from digestive acids or from being chomped) and that they were at the same stage of growth as the previous embryos," Long wrote in an email. "All of these facts proved they were embryos, not prey items" [LiveScience].

After discovering the embryo, researchers say their next step was to figure out the fish's reproductive method. When Long's team examined the pelvis of the male placoderm, they

realized the pelvis had a fin not seen on the female fish, and surmised it was likely used to grip its mate during fertilization, much as sharks do."These fish have an extra large bone that attaches to the pelvic bone," [Long] said. "It had been overlooked and hadn't been identified" [AP].

The study, published in Nature, goes into the intimate details of the fish's anatomy, explaining that the male's flexible "clasper" was inserted into the female to deposit sperm. Long says this seems to be