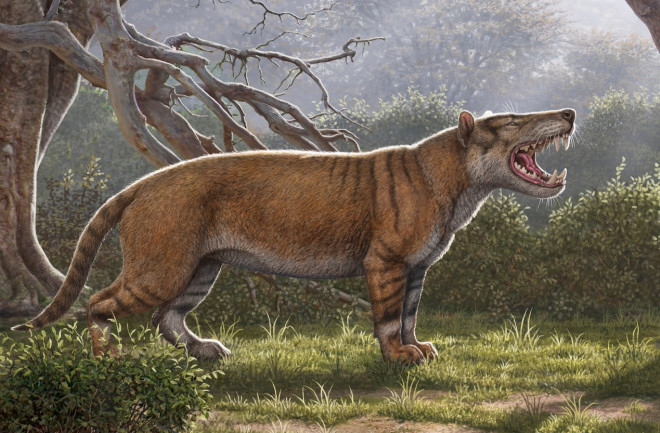 It was the size of a polar bear, with a mouth full of slashing blades. Some 22 million years ago, in what’s now Kenya, the mega-carnivore Simbakubwa kutokaafrika ruled.

The last of Simbakubwa’s lineage, carnivores known as hyaenodonts, went extinct more than 10 million years ago. Mostly fragmentary fossils of dozens of species have been found around the world, some smaller than house cats. Other species were much larger, but researchers had few clues about when these giants evolved.

A dig in southwestern Kenya in the late 1970s turned up a massive lower jawbone — about twice the size of a modern lion’s — and a few related teeth and other bones. But that expedition focused on Miocene primate fossils, and the team didn’t pay much attention to the fragmentary mega-carnivore remains. The bones ended up in a Nairobi museum drawer, unstudied for years.

Decades later, two paleontologists realized the jawbone belonged to a new species, the oldest member of a giant hyaenodont lineage known as the hyainailourines, suggesting this mysterious group originated in Africa.

Simbakubwa finally got a name, and the recognition it deserves. Announced to the world in April in the Journal of Vertebrate Paleontology, the animal reveals not only the origins of these XXL carnivores, but also how they adapted to a world of colliding continents.

Q: What was your first impression of the forgotten fossil?

Stevens: [I remember] opening the museum drawer that held the specimen and being awestruck imagining this enormous meat-eating animal on the early Miocene African landscape.

Borths: I was shocked when I first saw it. Of course, collections staff at the museum were aware of the specimen, but it was too large to fit in the drawers with its close relatives, so it had received relatively little attention from researchers since its discovery decades ago. I could see that it was one of the most complete giant hyaenodonts ever found in Africa.

Paleontologist Matt Borths holds the jaw of mega-carnivore Simbakubwa kutokaafrika. In life, the animal would have been about the size of a polar bear, with a mouth full of shearing, bladelike teeth. (Image courtesy of Matt Borths)

Borths: Its body resembled a muscular, giant lion with bearlike, flat feet and a long, wolflike snout. Its head would have seemed a bit too large for its body. Its back teeth are simple shearing blades. ... Some modern carnivores, like bears, dogs and wolverines, have back teeth that can shear and crush so those animals can be a little more omnivorous. Simbakubwa didn’t have crushing portions on its back teeth. Just blades.

Q: What would be the closest modern animal to compare with Simbakubwa?

Q: Impressive size aside, what’s the most significant thing about Simbakubwa?

Borths: Simbakubwa lived at the beginning of a time of intense environmental upheaval in Africa. It’s the oldest of these giant African carnivores, and its fossils show us how meat-eaters were adapting to the changing world. After millions of years as an island continent, Africa connected to Eurasia through the Arabian Peninsula. This new superhighway let animals from the north — like hyenas and rhinos — hike into Africa, and animals from Africa — like elephant relatives and the descendants of Simbakubwa — hike into Eurasia. On top of this ecological mixing, the connection between the continents rearranged ocean currents, and changed rainfall patterns and habitats across Africa. Simbakubwa is part of this ecological experiment that took place millions of years ago and set the modern African ecosystem in motion.

Q: What does Simbakubwa’s road to recognition tell us about the untapped value of fossils sitting unstudied in museum back rooms?

Stevens: Collections like the National Museums of Kenya have long been instrumental in recognizing and identifying new species to science. None of this would be possible without the tireless efforts of museum staff to preserve and protect specimen collections.

Increased public interest in paleontological finds is driven by a strong desire to understand changes on our planet over time. This has only intensified in recent years with the recognition that we are presently witnessing a mass extinction event with tremendous impact upon the future of our own species. Museums allow us to peer into the past to explore how organisms respond to changing climates and habitats, a data set we need to understand, now more than ever.