There's evidence for overcrowding, infections and violence in this 9,000-year-old city. 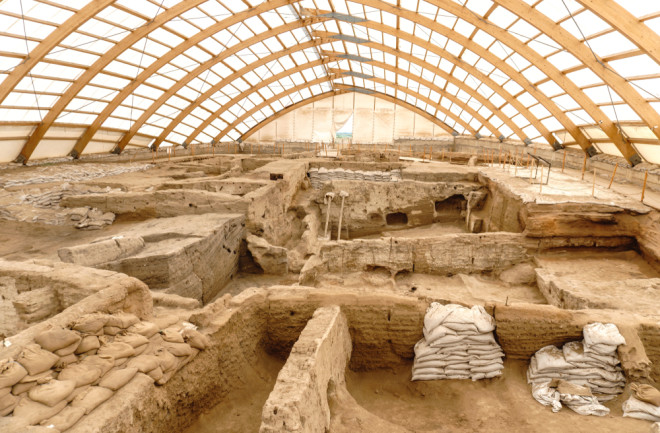 In the mid-1960s, an English archaeologist discovered an enormous and ancient settlement called Çatalhöyük on the Konya Plain in south central Turkey. Wall paintings and figurines of humans and animals revealed a cultured community once lived there around 9000 years ago. Crowded houses and numerous graves revealed a growing and complex society.

Researchers established the Çatalhöyük Research Project in the early 1990s to continue investigating what’s thought to be one of the world’s earliest urban communities. Now, they have discovered the early city had problems familiar to urban dwellers today, such as overcrowding, infections and violence, researchers report Monday in the journal Proceedings of the National Academy of Sciences.

“The bioarchaeological findings based on the study of the Çatalhöyük skeletons tells us in considerable detail about life conditions, living circumstances, and outcomes in a large, crowded, agricultural-based community,” says Clark Larsen, a biological anthropologist at the Ohio State University in Columbus, who led the new research.

While attending an archaeology conference at Brunel University in the United Kingdom in 2002, Larsen met up with Ian Hodder, the head of the Çatalhöyük Research Project. Hodder invited Larsen to head up the study of human remains from Çatalhöyük.

“I was quite taken by the idea, having heard so much about the enormous breadth and depth of the project,” Larsen says.

Larsen and his colleague Simon Hillson pulled together a team of students and experts to study the human remains at the site. They were looking at how diet changed over time, as well as how things like the transition to farming and living in a large, crowded community affected people there.

At its peak, Çatalhöyük had 3,500 to 8,000 people living in close contact with each other. Their diet mainly consisted of newly domesticated plants such as wheat. People would grind down the cereals and make them into porridges and bread.

Larsen and team assessed skeletal bones and ancient teeth from hundreds of individuals at the site. They found the relatively new diet derived from domesticated cereal crops gave people cavities. Soft textured foods such as breads also left people with gum infections. Overcrowding and the presence of animal pens near houses resulted in more infections.

They also found changes in the structure of inhabitants’ femurs, the long bone of the upper leg that supports walking. The discovery shows people had to walk greater distances as the community grew, the researchers say. The shift showed up not just in adults but in children, too. The finding means “work demands increased over time and it engaged much of the community, including juveniles,” Larsen says.

As the city became more populous, conflicts between people also became more common. Evidence for this violence came from the healed injuries of 25 skulls. The lesions suggest perpetrators threw or slingshot large hardened clay balls at the back of victim’s heads. More women were targets than men, and many had sustained multiple injuries.

“Our findings reveal a number of challenges, in a number of ways not that much different than human beings today,” Larsen says. “In the twenty-first century, we see an expanding global population, now approaching eight billion people, with all of them fully dependent to one extent or another on domesticated plant carbohydrates… wheat, corn and rice.” Ancient people domesticated all of these crops in the Neolithic when the Çatalhöyük community existed. Their diet created the basis for foods we eat today, according to Larsen, with many of the same kind of detrimental impacts to health.

“In many ways, circumstances of crowding, challenges to diet, and living in crowded settings predicts what the majority of the world population is experiencing today,” Larsen says. “In my view, our findings from Çatalhöyük give us pause to think about the future of society.”