Researchers Debate: Is It Preserved Dinosaur Tissue, or Bacterial Slime? 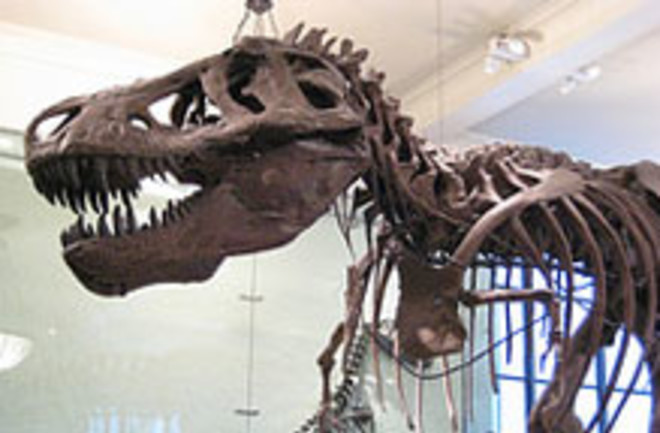 A new study may burst the bubble of dinosaur buffs by contradicting an exciting announcement of three years ago: what was earlier identified as soft tissue preserved in the thigh bone of a Tyrannosaurus fossil is actually just modern-day bacteria, researchers say. The new study challenges the work done by paleontologist Mary Schweitzer, who

garnered headlines in 2005 for reporting in the journal Science [that her team] had found the remains of blood vessels inside the fossils unearthed in the Hell Creek Formation in Montana. Finding tissue preserved at least 65 million years shocked paleontologists who believed any such traces were lost forever [USA Today].

For the new study, published in the journal PLoS ONE, paleontologist Thomas Kaye

went to the same formation where Schweitzer's sample came from, dug up a 65-million-year-old dinosaur bone, cracked it open, and looked at it [Reuters].

He saw the same branching structures that Schweitzer identified as the remnants of blood vessels and cells, but his analysis identified them as a bacterial biofilm that grew inside the channels formed by blood vessels.

Carbon-dating analyses of some samples indicate that the material is very recent, forming after 1950, Kaye says [Science News].

The debate isn't over: Schweitzer says her team considered the hypothesis that the material they found in the original thigh bone was a bacterial biofilm, and rejected the possibility. She says there’s no reported evidence that biofilms can produce branching, hollow tubes like those noted in her study

. Meanwhile, Kaye says that he never intended to play the role of spoilsport.

"Nobody was more disappointed than me," said Kaye. "We went into this trying to be the second group to find tissues" [Wired News].