Recent applications of principal components analysis (PCA) and multidimensional scaling (MDS) in human population genetics have found that "statistical maps" based on the genotypes in population-genetic samples often resemble geographic maps of the underlying sampling locations. To provide formal tests of these qualitative observations, we describe a Procrustes analysis approach for quantitatively assessing the similarity of population-genetic and geographic maps. We confirm in two scenarios, one using single-nucleotide polymorphism (SNP) data from Europe and one using SNP data worldwide, that a measurably high level of concordance exists between statistical maps of population-genetic variation and geographic maps of sampling locations....

There is concordance. But look at the figure below. On the left are populations where they were sampled, and the right shows the populations displayed in a manner to reflect genetic distances. 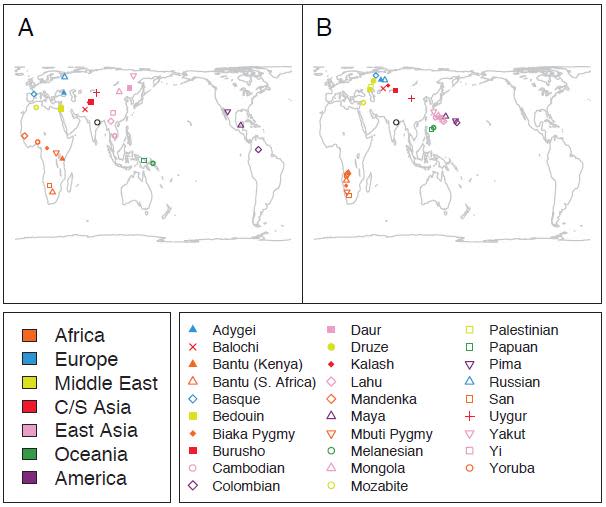 I don't want to make too much of this. The HGDP populations tend to be sampled from particularly distinctive groups consciously. But it does look like there is a stronger genetic clustering effect than one can predict from geography alone. That warrants investigation. I will leave the rest for comment.