Reification is alright by me!

Long time readers know that I'm generally OK with reification as long as we don't take it too seriously. And we do that all the time. An "object" is really only an "object" in a human-sense. Reduced down to particle physics it is an altogether different entity. But on the human-scale asserting that a chair is indeed a chair, rather than cellulose, etc., (or now, polymers), and further down basic macromolecules, is a useful "fudge." Similarly, I'm generally skeptical of the idea that we have a clear & distinct model for what a "species" is. The framework is very different when you're talking about prokaryotes, as opposed to plants, as opposed to mammals. The question is not species, but what utility or instrumental value does the category or class species have? For most of the stuff I'm concerned with, the messy shapes of reality which are the purview of biological science, we are all fundamentally nominalists in our metaphysic. We may accept that we're idealists in the sense of cognitive or evolutionary psychology, but human intuition does not make it so. The categories and classes we construct are simply the semantic sugar which makes the reality go down easier. They should never get confused for the reality that is, the reality which we perceive but darkly and with biased lenses. The hyper-relativists and subjectivists who are moderately fashionable in some humane studies today are correct to point out that science is a human construction and endeavor. Where they go wrong is that they are often ignorant of the fact that the orderliness of many facets of nature is such that even human ignorance and stupidity can be overcome with adherence to particular methods and institutional checks and balances. The predictive power of modern science, giving rise to modern engineering, is the proof of its validity. No talk or argumentation is needed. Boot up your computer. Drive your car. 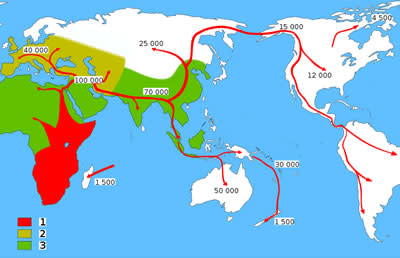 All this is to preface my explanation of my post below, "Finding Fake Roots." Some readers & commenters were a bit confused or unclear at what I was getting at. Here in a nutshell is the problem as I see it:

in Finding Your Roots Henry Louis Gates Jr. shifts back and forth between uniparental phylogenies, more contemporary model clustering assessments of genetic relatedness and relationships, and natural history

. The map above illustrates human migrations as they were commonly depicted in the mid-2000s during the peak of uniparental lineages. By uniparental, I mean the direct maternal line, as defined by mtDNA, and the direct paternal line, as defined by Y chromosomes. These two methods were easy to conceive as a phylogentic tree, because that's what these two genomic regions are. There's no recombination; mixing & matching between parents. You get your Y from your paternal lineage (if you are male), and your mtDNA from your mother. These neat phylogenetic trees of mtDNA and Y chromosomal lineages were then easily transposed to a spatial and temporal scale. Ergo, nice cartographic infographics like the one above.

But all good things come to an end. With "SNP chips," which allow researchers to type individuals across hundreds of thousands of markers, we now are at the stage where we can move beyond the direct maternal and paternal lines. Rather than just one line of descent, we get a full picture of one's ancestors. To the left are my daughter's result from 23andMe. As I have noted before, I'm 99% sure there's a problem with their results for people with particular mixed ancestries (my half East Asian/European friends get good results, so I assume it's a reference population problem). She is about 40 percent South Asian on ADMIXTURE, and that makes sense since I'm 80-90 percent South Asian (the balance is East Asian, which is not surprising due to my family's origin). But let's put that to the side. What are these results telling us? These algorithms are powerful. But we always need to be very careful about imposing our own frame upon them. They are excellent at gauging genetic relatedness, but they are not so excellent at telling us our history. 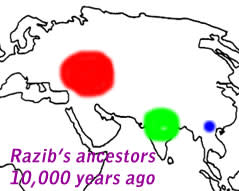 To the left is my best guess at "my history." I'm 80-90% South Asian. That's pretty clear, and will show up on any clustering algorithm with explicit models. It will also be clear on a PCA, where South Asians can shake out as their own independent dimension.

But 10,000 years ago South Asians as we understand them genetically probably did not exist

. By probably, I'm about 95% sure. The genetic analyses which support this proposition are abstruse, but they make sense of a great deal of other data. The South Asian genetic cluster is a real one, but it is compound formed within the last 10,000 years of two very distinct populations. Just because it is a hybrid does not mean that one should automatically reduce it to its antecedents. Many "real" populations originate as hybrids. Similarly, I think that there is a high chance that Europeans, as we understand them today, did not exist 10,000 years ago. Rather, modern Europeans as well may be a compound of various populations which expanded demographically, and synthesized with each other, between the end of the Ice Age and history. In my post below some commenters argued that obviously implausible inferences from a thin set of reference populations are acceptable considering Henry Louis Gates Jr's target audience. But that really wasn't my main point. Rather, it was that he was eliding the distinction between uniparental markers, and the clusters generated by modeled based ancestry assignment algorithms, and ascribing the phylogenies of the former to the latter. It is important to note that categories like "Europeans" are only approximations. But they're damn good approximations today! Nevertheless, note the qualification of time: they may have basically no meaning at some point in the recent past. They're powerful when it comes to precisely partitioning modern variation, but they don't tell us the history of that variation. When constructs lead us to a false perception of reality, we're using them incorrectly. We shouldn't blame the abstractions. Rather, we should blame humans. Ourselves.