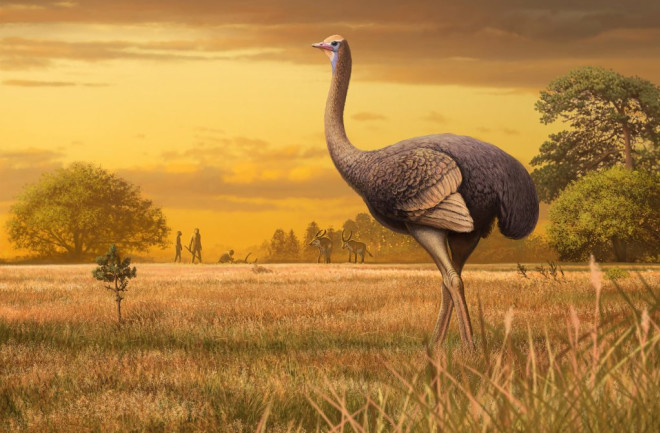 Towering more than ten feet tall and weighing in at about 1,000 pounds, big bird Pachystruthio was a big deal. The animal, which weighed about as much as a male polar bear, roamed the Black Sea peninsula of Crimea. That’s thousands of miles — and across the equator — from the better-known avian giants.

The earliest members of the genus Homo outside of Africa may have hunted Pachystruthio. But it’s unclear whether they would have been successful. The researchers behind the find say, unlike Madagascar’s large but lumbering elephant birds, this big bird was fast.

The animal’s massive thighbone turned up in central Crimea’s Taurida Cave, a site discovered only last year during a road construction project. Initial excavations at the cave have revealed an entire ecosystem of ancient giant deer, bison, saber-toothed cats and several other animals.

Researchers calculated the animal’s size as comparable to that of the giant extinct birds of the Southern Hemisphere, including New Zealand’s moa and the elephant birds of Madagascar.

With an estimated weight of just over 450kg (about 990 pounds), Pachystruthio would have been about three times larger than today’s ostriches. The modern birds get up to about 150kg.

By contrast, the largest of the elephant birds weighed an estimated 650kg (1,430 pounds).

Unlike the femurs of elephant birds, however, Pachystruthio’s thighbone is more slender and similar to that of a modern ostrich. That suggests the big bird may have been more of a runner than elephant birds, which researchers now think foraged at night.

A more fleet-footed mega-ostrich makes sense for Pachystruthio. Madagascar’s elephant birds lived on an island with no significant threat of predation (until our species showed up, that is). Pachystruthio had no such luck. Other fossils found at Taurida Cave include saber-toothed cats, giant hyenas and giant cheetahs.

Possible Prehistoric Meal On The Run

Researchers place the most likely age of Pachystruthio at 1.7 million-1.8 million years old. Although the Taurida Cave femur is the largest of any bird in the Northern Hemisphere, it’s got company, both in age and size.

The Taurida Pachystruthio fossil is likely about as old as two similar femurs found roughly 500 miles to the southeast in Dmanisi, a crucial paleontological site in the Republic of Georgia. The Dmanisi femurs are just a little smaller, at 380 and 385 mm compared with the 390-millimeter length of the Taurida thighbone (for Imperial system holdouts, that’s a range of 14.9-15.3 inches).

Dmanisi is home to the oldest hominin fossils outside of Africa, the earliest of which is about 1.87 million years old. Although formally classified as a subspecies of Homo erectus, the Dmanisi hominins remain somewhat of a riddle due to their unique mix of features.

The ages of fossils at both Dmanisi and Taurida suggest that early members of our genus shared territory with the big birds. It’s easy to imagine our distant ancestors collecting their eggs and shed feathers as resources. Early hominins may have even hunted them for meat — or at least sprinted in the same direction as the big birds while running from the ecosystem’s toothier members.

The research appears today in the Journal of Vertebrate Paleontology.