Thanks to epigenetics, generations of worms inherited increased sexual attractiveness when warm temperatures caused defects in their ancestors. 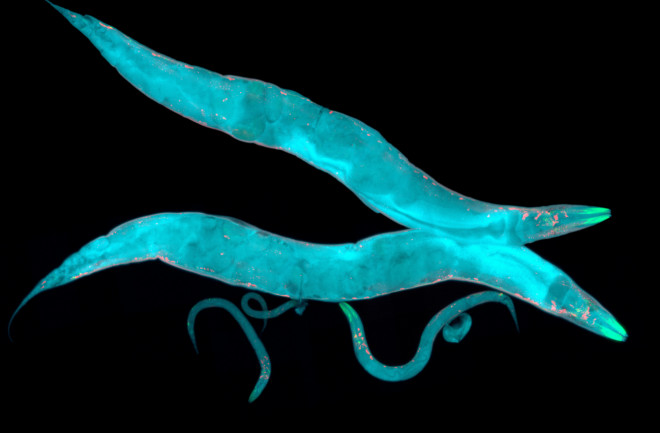 In the early 19th century, French naturalist Jean-Baptiste Lamarck put forth an evolutionary theory that the adaptations acquired by an organism during its lifetime could be handed down to its descendants. According to Lamarck, the lanky necks characteristic of modern-day giraffes, for example, supposedly emerged as a result of their ancestors' constant stretching. Though widely praised and popularized in the first half of the century, the theory was thoroughly scrutinized and debunked in the later half.

But two hundred years later, the research has come full circle. Scientists reported in Development Cell last month that parental adaptation responses to the environment can not only be handed down from generation to generation, but can even determine the course of evolution — at least in some roundworms.

Caenorhabditis elegans has become geneticists’ favorite worm in recent decades. It’s a very tiny roundworm, with a life cycle of just three days. It’s also androdioecious, meaning its offspring can be either male or hermaphroditic. Hermaphrodite worms produce both sperm and eggs; for most of their short lives, they conveniently self-fertilize. Toward the end, however, as the sperm reserve empties, C. elegans releases pheromones that attract male worms for cross-fertilization (the type of fertilization humans are more familiar with).

New studies in recent years have revealed that in worms like C. elegans, parental experiences can be passed down for up to 100 generations, explains Joel Rothman, a developmental biologist at the University of California, Santa Barbara who was not involved in the new study. “Lamarck’s assumptions [and explanations] were definitely naïve when he talked about the inheritance of acquired characters,” he says. “But now we are realizing that he was definitely right to some extent.”

Oded Rechavi, a geneticist at Tel-Aviv University in Israel, has long worked to determine how environmental change impacts gene functioning (or “epigenetics”) in C. elegans. In their latest experiment, he and his team were motivated by one big question: How do the roundworm’s offspring evolve when placed under constant environmental stress for multiple generations?

To find out, they reared the roundworms in the lab at 77 degrees Fahrenheit — a temperature that’s just bearably uncomfortable for the little nematodes. Then the team sat back and keenly observed them for generations. “In these worms, you can even [observe] over ten generations pretty quickly because it’s just three days until the next generation,” Rechavi says.

The worms obviously didn’t know whether this speedy cross-fertilization would work out, but it was their best bet. Rothman explains that the stressed worms passed the strategy to their children and grandchildren, almost as if to say, ‘Guys, we’ve been stressed. Unless you get other news, go out there and mate. We gotta fix things.’

The Biomolecules to Blame

After peering deeper into the cellular mechanisms behind this behavioral change, Rechavi and his team found the culprit biomolecules responsible: small ribonucleic acids. Small RNAs are secreted by every cell in the worm’s body, but one of its important functions is to regulate sperm genes. The researchers found that under higher temperatures, the small RNAs controlling sperm genes didn’t function well. Because of this defect, says Rechavi, “they probably couldn't fertilize their own eggs as well, so they started to produce the male-attracting pheromones earlier.”

Wondering why the worms waited a few generations before making the change? Rechavi speculates that something within the worms’ biology must first accumulate: “Perhaps the disruption to the pool of heritable small RNAs becomes so great that it crosses some sort of threshold.”

Shouhong Guang, a molecular geneticist at the University of Science and Technology of China who was not involved in the study, calls the research effort marvelous. Indeed, the findings could reshape our understanding of the role and mechanism of hermaphrodite behavior in animal evolution. “How each species will choose its reproductive strategy will determine whether the species could increase its own gene copies in the animal kingdom, during millions of years of evolution,” says Guang.

Though things aren’t crystal clear yet, there’s much to be excited about. “Simple model organisms often provide the first evidence,” says Rechavi, describing how 19th-century mathematician and biologist Gregor Mendel discovered various rules of genetics by studying pea plants — long before science knew anything about DNA or chromosomes.

Of course, the prospects of epigenetics and its implications for human evolution are also fascinating. Rechavi hopes that this sort of mechanism is also conserved in humans, “but we have to say very explicitly that currently we don’t know,” he says.

Meanwhile, Rothman, who is expecting a new grandchild in a few weeks, adds that the very idea of “how my life previous experiences may [biologically] affect them gives me chills.”