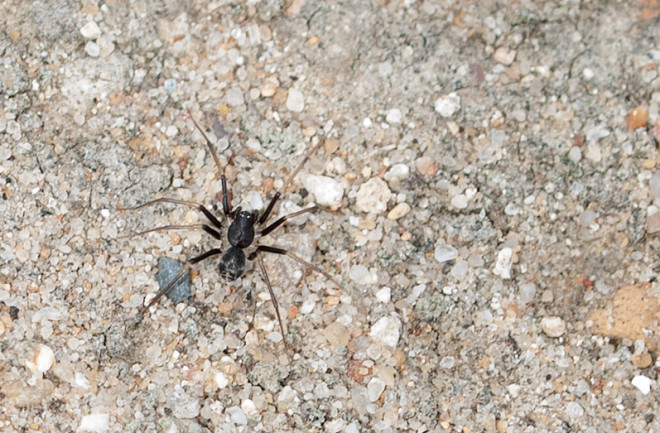 An ant-hunting Zodarion maculatum spider. Photo by Antonio Pizarro via iNaturalist Humans in North America only spend one night a year in costume with the hopes of feasting on tasty treats. For Zodarion spiders, that's just called Tuesday. These clever mimics pretend to be ants to sneak close to their prey. And if in danger, they'll use the corpse of their latest capture to complete the charade. The spiders in the genus Zodarion are ant specialists—which is a pretty dangerous lifestyle for a small spider. After all, ants are armed with strong mandibles and sometimes stingers. And that's assuming you're only dealing with one ant at a time. Ants don't tend to take threats to one of their own lightly, and will attack intruders and other threats en masse. When it's one little spider against dozens of ants, the spider doesn't stand a chance. Zodarion spiders don't do the sensible thing that other spiders do: they don't construct webs to ensnare their formidable prey. Instead, they creep amongst their target ants, putting themselves in serious danger. And yet, they move around largely unnoticed. This is partially because they seem a bit ant-like. They're not nearly as perfect at looking the part as some ant-mimicking spiders are, but they do alright. In addition to having some general morphology changes, like their bulbous backsides, the spiders have developed very ant-y microscopic textures to some of their body parts. And to further blend in, they'll walk funny, using only six of their eight legs for locomotion. They'll wave last pair—the frontmost—in the air, and use them to probe the ground in front of them—a clear attempt to mimic ant antennae. It's enough to let the spiders walk around their prey unnoticed, allowing them to sneak up on an unsuspecting ant and deliver a fatal bite. https://www.youtube.com/watch?v=G4KqJgFYZeE But once they've made a kill and have to escape the area with their meal, it becomes much harder to stay off the colony's radar. So that's when the spiders take their ant cosplay to a whole new level. These clever spiders actually use the corpse of their meal to sell their costume. Ants dispose of their dead because they could be carrying pathogens. Keeping an infected ant near the colony could lead to an outbreak, so ants regularly carry their dead away. It's this that the spider tries to mimic with its venom-slain corpse, a behavior scientists refer to as "shielding".

How a Zotarion spider tricks ants. A) the spider turns to face the approaching ant; (B) spider taps the ant's antennae; (C) spider raises the corpse, which the ant checks out; (D) the ant moves away. Figure 6 from Pekár and Křál, 2002 The spider holds its meal in front of or below itself using its mouthparts, much like ants carry their own dead. If a suspicious ant approaches a Zodarion spider when it's got its meal, the spider will attempt to convince the ant it's just another ant doing its antly duties. First, it taps the ant on its head or antennae, which is basically the ant way of waving hello. Then, the spider presents the corpse to the new ant. Scientists have studied this behavior in depth, and have found that the smell of the corpse masks the spider's Eau de Predator, allowing it to remain chemically hidden. The ant will investigate the corpse, and if convinced that there's nothing to worry about, simply walk off, leaving the spider free to drag its meal to a safe location where it can feast. This trick works about 75% of the time. But in about one-quarter of such encounters, the ants aren't fooled. This often happens when the ant's antennae accidentally graze the spider's legs instead of the corpse. Since the jig is up, the spider either tries to run with its prey, or drops it, hoping to draw the ant's attention to its fallen comrade. If the ant is distracted, the spider sometimes takes the opportunity to attack the new ant from behind—other times, it just heads for the hills. The spiders' aggressive mimicry, complete with corpse "shielding", is a unique evolutionary strategy that seems to work pretty well. Though scientists aren't sure how it evolved. Did the spiders start to look like ants to hide amongst them while hunting other prey? Or did they become ant specialists, then develop ant-y traits for efficiency? As for us, it's probably good that our trick-or-treating costumes and behaviors work much closer to 100% of the time. Otherwise, there would be a lot of angry kids on the loose every Halloween.