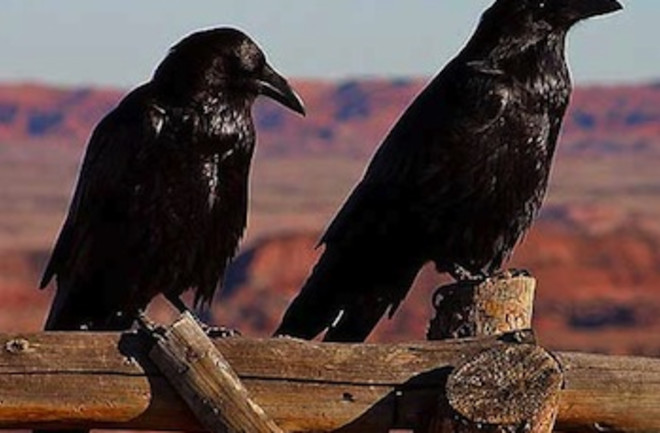 Before they can talk, babies use gestures to communicate: sentiments such as "take this away," "look over there," and "put me down" can be made abundantly clear without words. Chimps gesture to each other, as well, pointing out particular spots where they'd like to be scratched or groomed. These symbolic gestures are believed to be an important precursor to language. Now, researchers have observed ravens using gestures in the wild---the only non-primates seen doing so. Over two years, the researchers saw ravens pick up stones, moss, and other non-edible items with their beaks, and display or offer those objects to another bird, usually of the opposite sex. The other raven, in turn, usually looked over in response, and often had positive interactions with the gesturing raven. Other birds gift gifts while courting, but in this case, the birds weren't delivering the moss and stones to the recipient; the objects aren't put towards a purpose like making nests, as such gifts often are, and seem to be used solely to get noticed and spark an interaction. Since ravens form monogamous, highly cooperative pairs, these interactions could be used to attract the attention of a possible mate or solidify the bond with an existing one, the researchers suggest. Finding gestures in a species so distant from our own, they say, could help illuminate the origins of human language. Ravens, along with crows, magpies, jays, are corvids---a particularly brainy group of birds that have shown some sophisticated capabilities, such as recognizing human faces, building and using tools, and even passing on grudges. But that doesn't necessarily mean the birds are communicating through symbolic gestures: It's possible, other researchers point out, that what looks like an attention-grabbing gesture may be a mating ritual---an instinctive behavior driven by hormones---or a simpler, more scripted form of communication. Reference: Simone Pika & Thomas Bugnyar. "The use of referential gestures in ravens (Corvus corax) in the wild." Nature Communications, November 29, 2011. DOI: 10.1038/ncomms1567