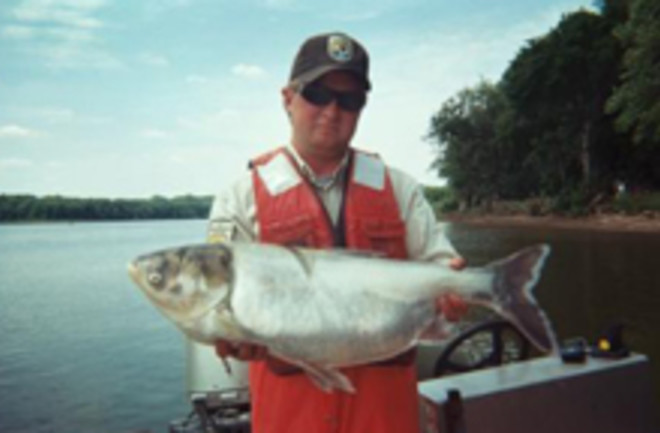 The Great Lakes are under threat from an Asian carp invasion that could wipe out fishing stocks, and with it, the lakes' billion dollar fishery.

On Friday, officials from the Army Corps of Engineers reported that genetic material from the carp had been found for the first time in a nearby river beyond an elaborate barrier system, which has cost millions of dollars and was meant to block their passage [The New York Times].

There is concern that if carp make it into Lake Michigan, they will gobble up the plankton that native fish feed on. Officials also say that recreational boating may be affected--the carp can grow up to 4 feet long and weigh up to 100 pounds, and the massive fish will occasionally leap up and strike boaters. Since they were found to be moving up the Mississippi River in 2002, agencies have been trying everything they can think of to slow them down, including erecting the expensive electric barriers that cost around $9 million. The barriers work by sending low-voltage electric current through steel cables that are strung across the canal; this creates an electric field that's uncomfortable for the fish and that's supposed to prevent them from swimming across it. No one has actually spotted any carp on the far side of the underwater electric fence, but

new tests let scientists detect the DNA of fish in a river or lake without actually seeing them. Fish have to pee and poop, too, and epithelial cells sloughed off from their bodies showed that Asian carp were in the Chicago Sanitary and Ship canal last month above an electrical barrier that was supposed to keep them out of the Great Lakes [Detroit Free Press]. I

f the carp have indeed passed through the barrier, that means only a single lock, which regularly opens to allow ships to pass, separates the carp from the world's largest freshwater reserve. The only non-threatening explanation for the DNA is that carp feces or eggs could have been carried across the barrier by ship and barge traffic. The carp DNA was found as close as eight miles south of Lake Michigan and one mile south of the last shipping lock. Ironically, the fish were originally imported to help Southern fish farmers fight algae-filled ponds in the 1970s. By the 1990s, flooding had pushed them into the mighty Mississippi and they began swimming north.Joel Brammeier, acting president of the Alliance for the Great Lakes, said "this is an absolute emergency"

because if the carp move past the last lock, there will be no stopping them. Brammeier is calling for the last lock to be closed and all shipping traffic into Lake Michigan to be halted.

The U.S. Army Corps of Engineers said it and other agencies had met since Wednesday to consider the best course of action. Authorities will be sampling the channel to try to locate any loose carp [AP].

Related Content: DISCOVER: Humans vs Animals: Our Fiercest Battles With Invasive Species (photo gallery) 80beats: Robo-Fish Are Ready to Take to the Seas 80beats: Are Fish Farms the Answer to World Hunger or a Blight on the Oceans? 80beats: Oysters on the Comeback in Chesapeake Bay, Thanks to Elevated Homes

Since rivers and lakes are very different ecosystems, scientists can't say for sure how well the carp would survive if they make it to the Great Lakes. But a worst case scenario has them spreading like a cancer--a doomsday scenario for a region already weakened by invasive species such as zebra mussels.