Rats succumb to peer pressure too

This week's New Scientist includes a short piece from me about conformist rats. 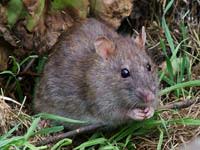 Until now, only humans and chimps were known to succumb to peer pressure, to the extent that we often ignore our own experiences based on the preferences of others. But a new study in brown rats shows that these rodents are similarly prone to following the Joneses. They can even be persuaded to choose a piece of food that they know makes them sick if they smell it on the breath of a 'demonstrator' rat. Bennett Galef and Elaine Whiskin at McMaster University in Hamilton, Ontaria, Canada, trained rats to avoid cinnamon-flavoured food pellets by injecting them with a nausea-inducing chemical (lithium chloride) after their meals. When given a choice between pellets flavoured with cocoa or cinnamon, they only went for the cinnamon ones about 5% of the time. But after spending time in the company of other rats that had just eaten cinnamon themselves, they regained their liking for it and chose cinnamon pellets about a third of the time. In contrast, rats that were left alone still had a strong aversion. The rats didn't get to see the demonstrators actually eating any pellets so their change in behaviour was most likely motivated by the leftover scent of cinnamon on the tutors' breath or fur. Residual odours explain how the rats conform but not why, and that's the big remaining question. Why should social learning override individual experience so completely? Why would a rat, or for that matter a chimp or a human, cast aside what it knows from its own experience and adopt a potentially inferior strategy just because someone else is doing it? Reference: GALEF, B., WHISKIN, E. (2008). Conformity in Norway rats?. Animal Behaviour DOI: 10.1016/j.anbehav.2007.11.012Image: Rat by Reg McKenna