Rats check their own knowledge before taking a test

Animals often show a keen intelligence and many species, from octopuses to crows, can perform problem-solving tasks. But humans are thought to go one step further. We can reflect on our own thoughts and we have knowledge about our knowledge. We can not only solve problems, but we know in advance if we can (or are likely to). 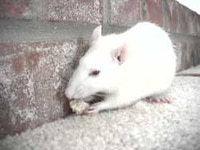 In technical terms, this ability is known as 'metacognition'. It's what students do when they predict how well they will do in an exam when they see the questions. It's what builders do when they work out how long a job will take them to finish. But can animals do the same? Finding out is obviously difficult. No animal is going to tell us what it is thinking. To work that out, we need clever experiments.

Allison Foote and Jonathon Crystal searched for metacognition in rats by giving them a test that they could decline. If they passed, they received a big reward and if they failed, they got nothing. But the cunning part of their study lay in giving the rats a small reward if they declined the test. If they knew they were unlikely to succeed, they'd be better off bowing out. In this experiment, a measured attitude beats a gung-ho one.

The test asked the rat to classify a burst of noise as 'short' or 'long'. Noises that were very short or very long were easy to classify, but those of intermediate length were more challenging. After hearing the noise, the rat was offered two holes through which it could stick its nose - one for accepting the test and one for declining it. If it was up for it, it was then given two levers, one for a short noise, and one for a long one.

After some initial training, the results were clear. The rats were much more likely to opt out of the test if the noise they heard was challenging. And when they accepted the test, they were much more likely to answer correctly than in trials where they were forced to take it. To Foote and Crystal, these results show that the rats knew when they didn't know the answer. And armed with this knowledge, they could make adaptive choices about their future.

I love experiments like this. They are elegant, clever, and ever so slightly like talking to animals directly. While we're never going to have Doolittle-style conversations with rats, looking inside their heads (experimentally not literally) is the next best thing. Scientists like Foote and Crystal are like lab-coated rat whisperers.