John pauses with his cursor over a photo of a dark yellow flower. He seems to be debating whether to say something. "I call this one the penis orchid," he admits.

I see it. The Coryanthes bears a bulbous, upright projection, behind which is a bucket-shaped area filled with fluid. Male euglossine bees tumble into the bucket while trying to collect the orchid's fragrance, which they use like a cologne to make themselves more attractive to females. As a male bee repeatedly falls into and crawls back out of these buckets, he unwittingly pollinates the flowers.

It's a great story, but the flower's endowment might be distracting to the middle- and high-schoolers who read the magazine I edit. "Yeah," I tell him, "my photo editor will never let that fly."

I'm visiting my friend John Osterhagen to research an article for kids about orchids. John works for an insurance company by day, but returns home to an apartment bursting with orchid plants. There are eighty or so, living in his bedroom on rows of shelves and windowsills, under special lamps or misting devices. John's cat, Keiko, likes to chew the leaves of just one plant, so he keeps it tucked in his farthest corner.

Flowers aren't John's only self-admittedly strange hobby. He loves early music, origami, and coloring with Crayolas. But none of his other hobbies lives and breathes in his home with him. "People say in the orchid world that you 'get the bug,'" he says. A few fussy but handsome potted plants become shelves full of exotic hybrids and a membership to the Orchid Society. "It's as if the orchids themselves are manipulating you."

John also has the bug for orchid taxonomy, which is always changing as genetic studies revise the family trees guessed at by past centuries' naturalists. He rattles off genus names: Paphiopedilum, Phragmipedium, Bulbophyllum. Sometimes a genus becomes empty and abandoned as taxonomists shift all its species into different groups. John keeps up on the research and edits Wikipedia pages where he can.

The magazine story I'm working on is about deception. Orchids thrive on lying. Some grow petals that look precisely like the back of a female bee or beetle or wasp; a male of the targeted species will try his hardest to mate with the unresponsive flower part while the orchid quietly glues its pollen onto his head. Other species trap their pollinators in well-like petals that can only be exited through a tunnel rigged with pollen. There are orchids that mimic other flowers to attract the pollinators that drink their nectar. (Most orchids don't make nectar, the usual lure for insects, at all.) Those that seek to attract carrion flies mimic rotting meat, emitting a stink from masses of gut-colored petals decorated with maggoty white streaks. 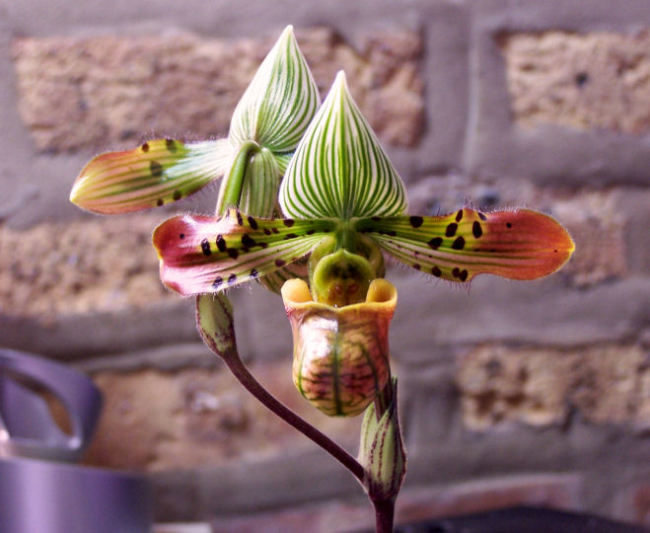 John shows me examples on his computer and on his shelves while Keiko paces around our ankles. A petite epiphytic orchid—a species that lives on trees with its roots dangling into the air—has bloomed just in time for me to see it. He points into the innards of another flower, where I can barely make out the trap door flanked with pollen blobs.

And he points out several species that bear a speckled pattern around their centers, as if a breeze has generously dusted them with their own pollen. In reality, the pollen is waiting elsewhere in a large mass to be attached to a pollinator. John has a strong suspicion that the speckles are another kind of deception, meant to attract insects that eat pollen. "I don't know whether it's been studied academically," he says.

The flowers bloom infrequently and on their own schedules, most often around December or January. Even after putting so much effort into dressing up for a pollinator, they seem not to care whether they get pollinated at all. John says he sometimes gets up in the morning to find that an orchid has tossed a new, perfectly formed blossom to the ground overnight.

The whole family of Orchidaceae, in fact, can appear bent on self-destruction. They grow slowly, sometimes taking years to reach maturity. They're "insanely specialized to their pollinators," many wagering all their future generations on a visit from a single species. If pollinated, they produce seeds that are nearly microscopic. And those seeds can't sprout unless they happen to cross paths with a fungus that will enter into a symbiotic relationship and provide the nutrients the orchid needs. "It seems like the odds are stacked against them," John says.

Yet orchids are some of the most successful plants in the world. There are around 25,000 species, living on every continent except Antarctica and in nearly every kind of climate. They're either the largest or second-largest flowering plant family that exists, depending who does the counting.

The secret to their world dominance may be genetic. During the orchid's evolution, master genes that control the organization of the flower were duplicated. This gave the plant a huge amount of freedom to mutate. New flower shapes emerged to fill thousands, then tens of thousands, of ecological niches.

John doesn't breed his plants. With their expected pollinators never showing up, and John declining to pollinate them by hand, he says they're "the world's most sexually frustrated orchids."

But he does see plenty of mutants. The orchid tendency to create genetic monsters manifests even in his apartment. John shows me a plant that grows flowers with four parts instead of six, and another that has piles of unnecessary petals, "like a Frankenstein flower." He has a plant that can't keep its flowers' lips (the modified petals at the front and center) straight from its other petals. After the mottled fuchsia flowers open, the lips try to turn into petals while the petals start to curl like lips. In a photo, another flower grows an extra petal straight from its center, like an arm coming out of its face.

Orchid growers keep track of individual plants with an elaborate naming system that traces each plant's family history. Thanks to the finickiness of orchid growth, many of these species can't be cloned like other plants can. So their incarnations on John's shelves are one of a kind.

Whether they grow flawless blossoms or freaks, "that particular plant is unique in the whole world," he says. "Like a human."

All images by John Osterhagen. Top to bottom: An orchidarium; Paphiopedilum venustum (a Himalayan species species with a pattern that, John notes, looks like a brain); Jumellea comorense (native to the Comoros Islands in the Indian Ocean); and Dendrobium Negro