Will tourism make or break the traditional cultivation system that has made Bali famous? 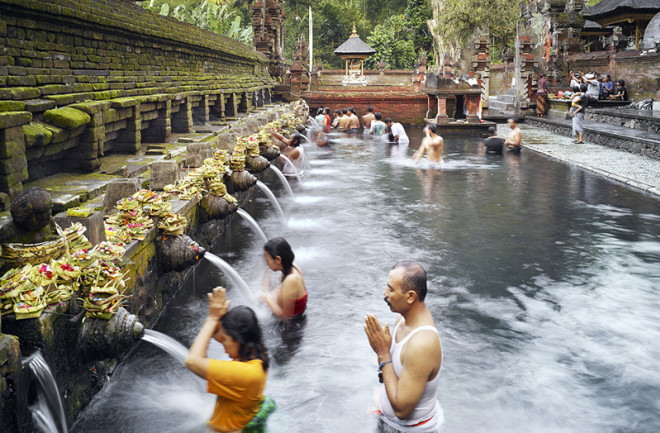 Balinese farmer I Made Perasi understands the challenges of modernization well. He straddles two worlds as the owner of a car wash and the leader of a thriving but threatened rice cultivation system in the Pakerisan River’s Valley of Kings. His title is pekaseh, the elected head of a green and fruitful pocket of the watershed, which includes 110 families and their separate-but-cooperating rice paddy operations.

At the edge of one such paddy, Perasi dismounts his Honda motorbike and walks along a narrow canal. He’s wearing a traditional head wrap and sarong topped by an apricot-colored polo shirt. Perasi waves at a family splashing in water that will later flow out to irrigate their rice, as well as the coconut trees and bird-filled shrubs that divide the paddies. This may be rice country, but that’s hardly the only thing that grows here.

Perasi stops at a spot overlooking fields of lime-colored, foot-tall organic brown rice. These fields, along with a millennium-old system of ditches, weirs and temples, make up his “subak.” The term refers to all the farmers who share irrigation water from a common source, be it a natural spring or the flow from a weir. Perasi’s duties here include settling disputes, worrying about the weather and making regular flower offerings to the water gods at nearby springs. Lately, they also include dipping into national and even global environmental politics.

Subaks like this one are becoming increasingly rare. Most of the rice currently grown in Asia’s picturesque terraces is fast-growing white rice, introduced, along with pesticides, in the 1970s. Many of Bali’s other subaks (there are 1,200 in all) have been whittled down as land and water get sold for hotels or other real estate development.

Farmers self-organized a democracy from the bottom up, free of the order imposed by kings or lords.

In fact, the undeveloped farmland and beauty of the ancient temples along the springs in Perasi’s subak are so unusual that in 2012 the United Nations listed it and 20 others as part of Bali’s first World Heritage site. Ironically, while Bali’s commercial tourism industry threatens these complex working landscapes, it also provides the best hope to conserve them, if it can be done right.

Harmony From the Bottom Up

Why is the U.N. bothering to protect a few terraced rice beds? They certainly aren’t as visually impressive as some World Heritage sites, such as the Taj Mahal. The significance of Bali’s subaks lies in their coordinated operation. Farmers self-organized a democracy from the bottom up, free of the order imposed by kings or lords. Through trial and error, they perfected an amazingly effective way to divvy up water, time their harvests and boost yields.

Joining Perasi along the canal is American anthropologist Steve Lansing, director of the Complexity Institute at Nanyang Tech University in Singapore. He started studying Bali’s subaks three decades ago to learn how they consistently produced good rice yields without modern inputs like pesticides. The answer was part ecological and part social, he says.

The rice here doesn’t need much fertilizer because the volcanic soil is already rich in potassium and phosphorus. And the cycle of wet and dry phases fosters the growth of nitrogen-fixing cyanobacteria in the terraces, providing the plants with a naturally occurring source of usable nitrogen. Subak members have also learned that by planting their rice in unison, they can starve out pests during the agreed-upon fallow season.

A deep, shared spiritual cosmology smooths occasionally rough-edged human relationships within the subak, Lansing says. Together, members of the subak travel to their water source’s shared delivery canal and “borrow” cups of water to sprinkle on their fields. The ceremonial practice reminds them that they are relying on the same resource, like an extended family sharing a house.

The subaks are governed by the Balinese-Hindu concept of Tri Hita Karana, meaning “harmony between people, nature and God.” Lansing calls this stable but changing harmony a “complex adaptive system.” In the early 1980s, he wrote a computer model to investigate the emergence of cooperative behavior among Balinese rice farmers. It showed that complex, optimized irrigation networks could arise from a series of false starts, abandoned irrigation works, conflicts between groups of farmers and environmental perturbations. And the resulting systems responded nimbly to problems like droughts or pests without any overarching management.

“The rice paddies impose very stringent requirements on not a single individual but whole communities,” explains Lansing. “A very high level of cooperation is necessary for generations to create these terraced landscapes and then to maintain them. If everyone makes decisions about the balanced flow of water from one field to the next, a global solution emerges.”

But as 3.3 million tourists a year bike, surf, hike and downward-dog their way through the scenic Indonesian island, more and more farmers are selling their land to foreign developers. Of Bali’s 81,000 remaining hectares of subaks, about 1,000 are lost each year to development, and the water that once cultivated rice now fills hotel pools. The land sales increase taxes for the farmers who remain and create more pressure to sell, which threatens the whole delicate irrigation system.

“We need to protect the subak,” Perasi says, looking out over the shining, water-soaked paddies. He says he is pleased that this subak, called Kulub, was included in the World Heritage site because the designation requires that the Balinese government come up with a plan for maintaining it.

The designation alone, though, does not ensure protection because it doesn’t come with instructions on how to protect the sites or manage tourism. If anything, the new listing may bring more tourists, roads and hotels to the area. That’s what happened to the rice terraces farther west, near the border of Mount Batukaru National Park.

Perasi has a more subak-centered vision for the future, and it includes a lot of hiking. “I would like to see tourists be able to trek through the subak,” says Perasi. “Not too many structures, not a lot of concrete, just grass trails. They can drink a coconut. If it doesn’t interrupt the farmers, it will be no problem.” He’d also like to help design small-scale tourist facilities and keep some visitor fees for maintaining the subaks. That’s not always the case in these sites, Lansing points out; at Angkor Wat in Cambodia, another World Heritage site, most of the tourism revenues go to a private management company, and very little money reaches the local communities.

Empowering village and subak leaders to control the influx of tourism around the new World Heritage site was a key component in the management plan that Lansing helped draft as part of the site’s nomination dossier. So far the Indonesian government has been slow to include these players in discussions, but if history is any lesson, Lansing and Perasi have reason to be hopeful. The defiantly democratic subaks have avoided top-down management for 1,000 years, so if any cultural site can pull off locally driven tourism, it should be this one.

Perasi’s counterpart, I Gusti Ngureh Anom Mika, whom we visited in the next town, hopes someday that his subak, too, may be included in the protected zone. “I worry about the future. We should be keeping the inheritance of our ancestors,” says the pekaseh who works in a high-end hotel bar by day. “Hotels are stress. When I go to the rice paddy, I feel free.”

[This article originally appeared in print as "Raising Rice Right."]