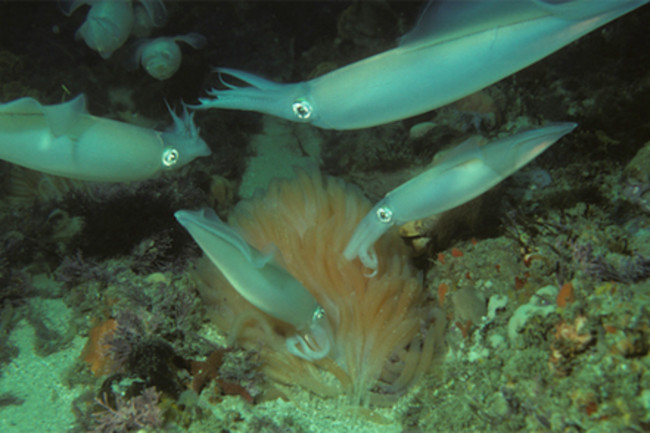 In a flash, schools of male longfin squid can turn from peaceful gatherings to violent mobs. One minute, individuals are swimming together in peace; the next, they’re attacking one another. The males give chase, ramming each other in the sides and grappling with their tentacles. These sudden bouts of violence are the doing of the female squid. Males are attracted to the sight of eggs, and females lace the eggs with a chemical that transforms the males into aggressive brutes. Yesterday, I wrote about scientists who could instigate aggression in mice with pulses of light. The longfin squid do the same thing with a rage-inducing chemical [embed="610"]http://www.youtube.com/watch?v=TeeIxKf8_do[/embed] Roger Hanlon, an expert in squid, octopuses and cuttlefish, first described these sudden fights in 2003. The longfin squid (Loligo pealeii) live for less than a year. During spring and summer, females gather in large spawning sites and males compete for their attention. The females mate many times and after each round, they lay bundles of eggs (called ‘mops’) on the ocean floor. Hanlon found that males are attracted to the sight of the mops – they’re a sign that fertile females are nearby. But when they touch the eggs with their tentacles, their temperament changes from calm swimming to extreme fighting. Even if there aren’t any females around, they still turn on rival males. Something on the eggs changes their behaviour. Now, Scott Cummins, working together with Hanlon, has identified the molecule responsible. He took extracts from the eggs and separated the chemicals inside them into ever narrower fractions. Each time, he tested the extracts on live male squid to see which contained the violence trigger. Eventually, he landed on a single protein called Loligo beta-MSP (or Loligo beta-microseminoprotein in full). The female squid secrete this violence protein from the same glands that cover the eggs with protective outer coats. Embedded in these coats, the protein can stay active for days or weeks. This is why males need to actually touch the eggs for the chemical to have any effect. It’s a “contact pheromone”. Cummins thinks that the behaviour-switching chemical benefits both males and females. Males can focus their strength and aggression to times when it’s most likely to lead to something positive – a chance at fertilising a female. Females ensure that only the strongest males can get to them. The squid’s violence protein has an ancient history. It’s part of a group of proteins called beta-microseminoproteins that are found in a variety of animals, and probably arose in the kingdom’s earliest days. The family is diverse and evolves quickly, but there are some similarities between the different members. For example, the human version is one of the most common proteins in semen and like the squid protein, it’s secreted by sex glands. No one knows quite what these proteins do in humans and other animals, but it would be fascinating to see if they could also influence our behaviour, just as their squid counterparts do. The idea isn’t so far-fetched. We know that the tears of mice contain chemicals that can make females more sexually receptive, and males more aggressive. Just last month, Israeli scientists found that human tears could also contain a chemical signal – the smell of female tears makes men less sexually aroused. Reference: Cummins, Boal, Buresch, Kuanpradit, Sobhon, Holm, Degnan, Nagle & Hanlon. 2011. Extreme Aggression in Male Squid Induced by a b-MSP-like Pheromone. Current Biology; citation tbc. More on squid: