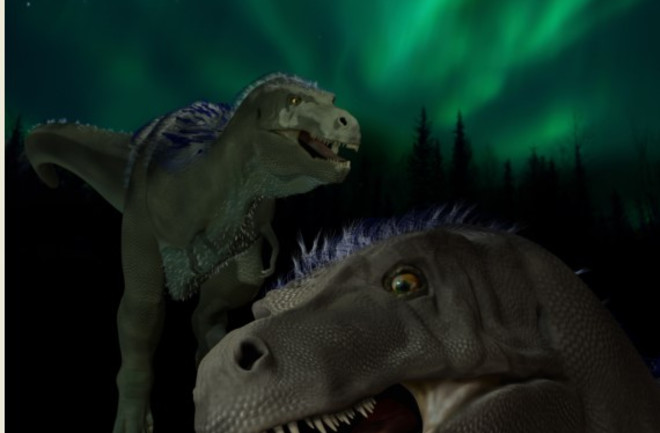 Oh the Northern Lights, they shine so bright, and....AAAAAGGGH! About half the size of the famous T. Rex, pygmy tyrannosaur Nanuqsaurus hoglundi called Cretaceous Alaska home 70 million years ago. Credit: Illustration by Karen Carr. A newly reclassified predator may have been the Napoleon of the dinosaur kingdom---a diminutive tyrant. Researchers analyzing the partial skull, jaw and teeth of the 70 million year old dinosaur believe the animal was a smaller relative of the famous "King of Tyrants," Tyrannosaurus Rex. Nanuqsaurus hoglundi, found in northern Alaska, was initially classified as a different species of carnivorous theropod. However, new analysis suggests it is a previously unknown tyrannosaur that is closely related to T. Rex and to fellow toothy tyrant Tarbosaurus. The new genus name Nanuqsaurus is based on the local word for "polar bear."

N. hoglundi's skull, in adulthood, was estimated by researchers to have been 25 inches long. By comparison, the adult skull of a T. Rex was about 60 inches. It's likely that the animal's body length was about half of an adult T. Rex, based on the skull proportions.

Nanuqsaurus hoglundi (A) as compared to T. Rex (B and C) and other species. The scale bar equals 1 meter. Courtesy PLoS. Researchers believe N. hoglundi's smaller size may have been an adaptation to its Arctic environment. Though much warmer than today, the Alaska of the Cretaceous would have still experienced seasonal temperature extremes due to its high latitude---and, consequently, variations in available food sources. The team reported their analysis today in the online open-access journal PLoS One. The find is important not only for expanding the known range of tyrannosaurs, but also because it provides valuable insight into the fauna of the late Cretaceous Arctic. Previously, tyrannosaurid dinosaurs were found almost exclusively in lower latitudes in Asia and North America, where they were apex predators. N. hoglundi likely was the top of its food chain, too. Finding its fossils in the Prince Creek Formation on Alaska's North Slope is already rewriting our understanding of the ecology of the northernmost stretches of land during the Late Cretaceous.