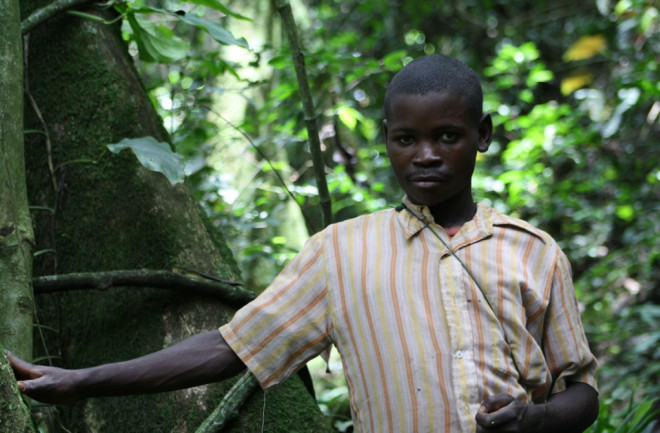 Batwa rainforest hunter-gatherer in Bwindi Impenetrable Forest National Park, Uganda. Image courtesy of George Perry There are roughly half a million known pygmy people living in various tribes around the world, clustered mainly near the tropics in African and Southeast Asia. Anthropologists have long attributed the small body sizes of pygmy peoples to nutritional deficits resulting from harsh living conditions of the rainforest. But in a new study, researchers report that the human pygmy trait has a genetic basis, and has in fact evolved several times in different populations. "We have found the strongest evidence yet that the pygmy phenotype is controlled by genetics," Luis Barreiro, the study’s author, told

Researchers focused on the Batwa pygmy people of Uganda’s Bwindi Impenetrable Forest, comparing them to their taller neighbors, the Bakiga people. The Bakiga were on average 5 inches taller than the Batwa, but they inhabit a similar environment, eat similar food and often intermarry. They collected blood and saliva samples from 169 Batwa adults and 61 Bakiga adults and compared their genomes. The DNA analysis revealed 16 different genomic locations associated with the pygmy phenotype. These variations were in areas of the human genome that code for human growth hormone and bone formation. Further, the analysis revealed that the effects were cumulative: people with more of the Bakiga genes at these locations were also taller.

Their findings led to another question: Do all human pygmies have a common ancestor? To answer this, researchers took DNA samples from another pygmy tribe in west central Africa, called the Baka. If the pygmy phenotype originated from a common ancestor, then the genomes of the Baka and Batwa would vary in the same ways. However, this was not the case. The two tribes’ pygmy genes were different. That means that pygmy traits evolved independently in these two different populations, and likely in many different populations around the world. Researchers published their findings Monday in Proceedings of the National Academies of Science.

Researchers speculate that pygmy mutations were beneficial in a rainforest environment, and so when they arose, they spread. For example, shorter people have an advantage in the rainforest because they generate less body heat, need less food and don’t use up energy repeatedly ducking under myriad vines and branches, researchers say.  More study will be needed to determine just how environment interacts with genetics to favor a pygmy stature. And the evidence just goes to show that humans, just like every other creature on this planet, continue to evolve to acquire advantages in our environments.