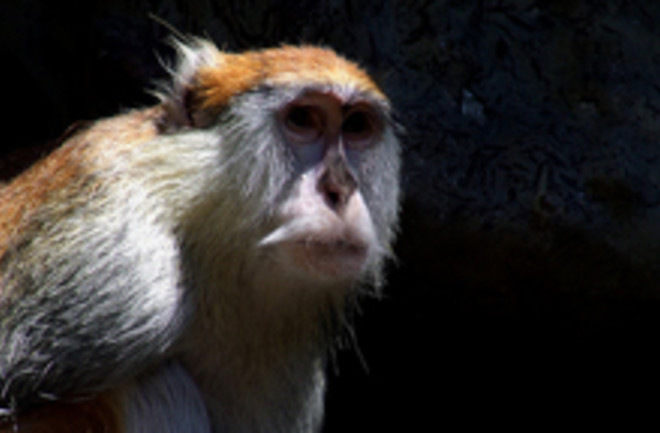 Fool me with monkeys once, shame on you. Fool me twice... well, Puerto Ricans won't get fooled again. Some people on the island commonwealth are up in arms over the proposal by a company called Bioculture Ltd. to make Puerto Rico a major supplier of primates to researchers in the United States. Beyond the ethical issues connected to animal testing, the AP reports, Puerto Ricans have "a bad history with research monkeys":

The U.S. territory has long struggled to control hundreds of patas monkeys, descendants of primates that escaped in recent decades from research projects and now thrive in the lush tropical environment.

No labs want the patas monkeys because they're no longer right for research, and many are diseased. There isn't much demand from zoos, either. So rangers from the island's Department of Natural Resources trap and kill them.

Bioculture counters that its proposed facility in the mountainous region of Guayama would bring 50 jobs and other economic benefits, like buying fruit from local farms to feed the African monkeys, to a place currently reeling from 16 percent unemployment. Bioculture executive Moses Mark Bushmitz tried to reassure people from the Guyama neighborhood of Carmen, which is near the proposed facility, that their homes would be no more run over with research primates than homes in Cambridge, Mass.:

To be fair, though, there isn't a history of monkeys that "run though backyards, stop traffic and destroy crops" in Harvard Yard. Related Content: Discoblog: Are "Microlungs" the End of Lab Rat Experiments?

Discoblog: Muriqui Monkeys, However Gentle, Will Kill to Mate