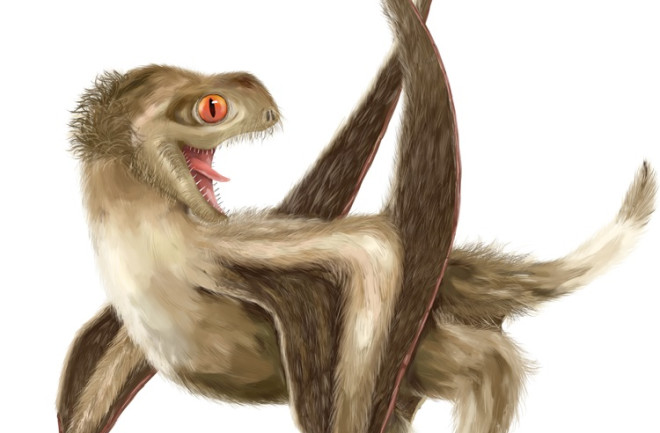 An artist’s rendering of a short-tailed pterosaur — feathers and all. (Credit: Yuan Zhang/Nature Ecology & Evolution)

The discovery of novel filaments on two species of pterosaur suggests that the extinct flying reptiles had complex coats of “feathers” and fuzz, say the authors of a new study. The presence of these apparent pterosaur feathers may indicate that the ancestor of both pterosaurs and their cousins, dinosaurs, sported similar coverings — but that’s not the only hypothesis.

Like dinosaurs, pterosaurs are archosaurs. This group of reptiles, which also includes crocodilians, likely emerged in the Late Permian Period (more than 250 million years ago) and dominated the Mesozoic Era that followed. Archosaurs abounded, all the way up until about 66 million years ago and the end-Cretaceous mass extinction, which spared only one dinosaur lineage (birds) and some crocodilians.

True feathers, with complex, branched structures, have been found on several theropods — one of the main branches of the dinosaur family tree and the lineage that includes birds. Less complex filaments, akin to fuzz or down, have been found on a few non-theropod dinosaurs.

For decades, paleontologists have also found filaments on well-preserved pterosaur fossils. These filaments, known as pycnofibers, have been simple structures — think a hollow, unbranched tube — that illustrators typically render as a fur-like covering when recreating the animals.

Today, however, researchers announce that they have found four different types of pycnofibers on two specimens of short-tailed pterosaurs from the Middle-Late Jurassic of China, more than 160 million years ago.

Type 1, as described in the new study, is the simple, hollow pycnofiber seen on other pterosaur fossils. This type covers most of the body of each specimen, reminiscent of mammalian underfur, say the authors, suggesting it may have played a role in thermoregulation.

The other three types, however, appear to be branched structures and are present only in specific areas. Type 4, for example, which superficially resembles a tree branch (see (n) in image below), occurs only on the wing membranes.

Types 2 and 3 (h and k, above) appear to have different branching structures and were found only on small areas of the head, neck and limbs of one specimen.

Further analysis of all four types of pycnofibers revealed they have a chemical signature similar to that of human hair and the feathers of living birds.

Preserved within the pycnofibers, say the authors, are melanosomes: cellular structures that provide clues to the animal’s pigmentation in life. Fossilized melanosomes recently have been used to reconstruct iridescent dinosaur feathers, but the pterosaurs were apparently not quite so flamboyant. Based on their melanosomes, the flying reptiles would have been mostly brown.

The presence of apparently branched pycnofibers on the fossils reinvigorates a general debate over feathers in Archosauria. Researchers and armchair paleontologists alike have long argued over when true feathers evolved and in which lineages.

(Most scientists believe the first feathers probably emerged for insulation and display, such as to signal an individual’s fitness to a potential mate. Only much later along the evolutionary road were they co-opted, by some species, for use in flight.)

One school of thought holds that true, branched feathers evolved among theropod dinosaurs, though not every theropod sported them. There is no evidence, for example, that T. rex and other iconic megapredators had feathers. This hypothesis suggests that any unbranched feathers or other filamentous structures found on pterosaurs and non-theropod dinosaurs were examples of convergent evolution, when unrelated species occupying the same ecological niche evolve similar traits.

According to this hypothesis, pterosaurs’ pycnofibers arose independently from dinosaur feathers.

The new analysis of the two Chinese pterosaurs’ pycnofibers, however, could be seen as evidence for another hypothesis: that the currently unknown archosaur ancestor of both dinosaurs and pterosaurs had feathers of some type, and passed the trait down to both groups.

Today’s paper is not the first time researchers have declared they’ve essentially found pterosaur feathers. Pycnofibers on another Chinese pterosaur, Pterorhynchus wellnhoferi, were described as branching and homologous to feathers, though subsequent analysis by other paleontologists questioned those conclusions. That earlier paper, like today’s study, is no slam-dunk in part because analysis of the pycnofibers is as much art as science, and open to interpretation.