We can now find chemical signatures in a fossil without destroying it. 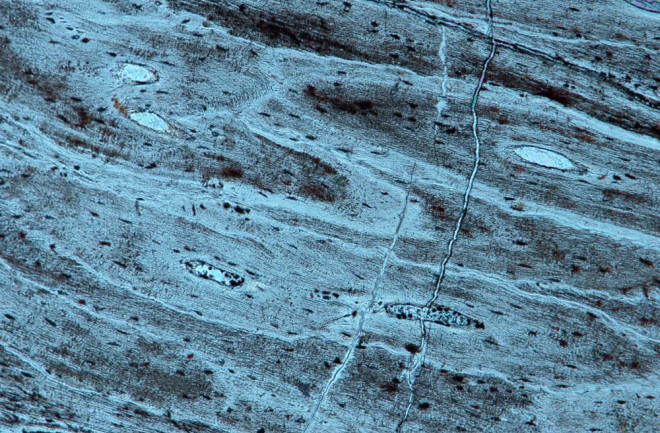 Researchers in Taiwan used an innovative technique to find the protein collagen in a dinosaur rib that’s a whopping 195 million years old. Other researchers had previously identified proteins in fossils less than half as old, but those efforts required destroying part of the fossil itself.

The new method, described in Nature Communications in January, allows scientists to read chemical signatures present within a specimen to identify proteins and other organic remains non-destructively.

“Most other material is extracted by dissolving the bone,” says co-author and paleontologist Robert Reisz of the University of Toronto Mississauga. “But if you did that with this specimen, you’d see nothing.”

The team looked instead at tiny blood vessels, about half the diameter of a human hair, within the rib of an Early Jurassic Lufengosaurus specimen. There they found the specific chemical signal of collagen, which is crucial to connective tissue.

The specimen also contained hematite, likely derived from the animal’s blood. The team believes the hematite sealed the blood vessels, protecting the collagen from contamination and degradation.

Researchers hope the process of reading the chemical signatures can be refined to reveal details of dinosaur biology — such as thermoregulation — that are difficult to determine from conventional fossils.

“The point is that, if you look, you can actually find remains of soft tissues in deep time,” says Reisz. “It opens up our eyes.”