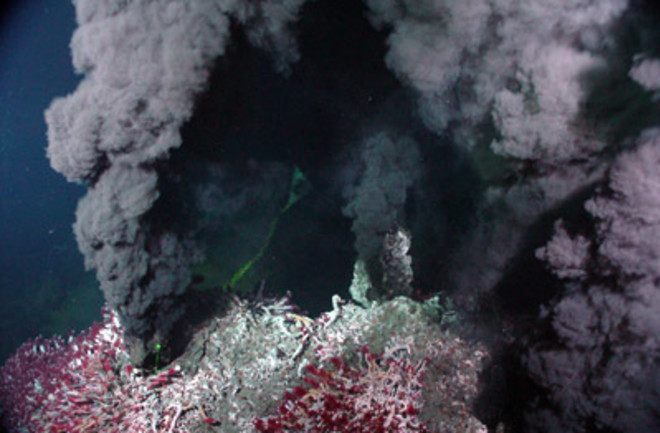 Volcanic vents under the ocean may have provided the elements necessary for life to form. Credit: NOAA/Wikipedia Scientists have long pondered how life arose from a primordial soup of inorganic chemicals and began to reproduce. An essential component of this process is DNA, which tells cells how to form and what to do. DNA guides organic processes, yet DNA itself is the result of an organic reaction. So which came first? It’s a microbiological version of the chicken and the egg.  In 2014, a group of scientists at the University of Cambridge offered an answer to this age-old question by showing that metabolic reactions producing essential parts of DNA could take place in the early oceans, before life appeared. The researchers used samples of early sediments to reconstruct Earth’s oceans as they appeared billions of years ago, and they found that the available ingredients could react to form important organic compounds essential to life, much like our bodies do today.

Now, the researchers have released new findings in the journal Science Advances that show evidence for another important cellular function. Not only could the early oceans complete organic reaction chains, they could regulate them as well. The ability to start and stop biological processes within our bodies is vital to our survival and ensures that we maintain a state of homeostasis. Today, enzymes are responsible for catalyzing and regulating essential functions in our bodies, such as metabolism. Without a catalyst, many organic reactions would happen much too slowly to sustain life. This is also how enzymes regulate bodily functions — no enzyme means no reaction. Through more than 4,000 mass spectrometry and nuclear magnetic resonance experiments with elements found in Earth's early oceans, researchers found two variables that could have regulated organic reactions in ancient ocean environments: pH levels and concentrations of iron. The early oceans had much higher levels of iron than today, as the lack of oxygen prevented oxidation. The researchers previously discovered that a form of iron found in the early oceans could act as a catalyst much like enzymes do today, creating sugars from phosphate and other substances. Now they have found that the catalyzing properties of iron allow it to regulate reactions like enzymes do as well. The researchers found that pH levels could have played an important role in regulating organic functions by altering which reactions took place. Alkaline solutions led to the creation of pentose phosphate, an initial step in the production of amino acids, while neutral pH levels stimulated glycolysis, part of the process that forms ATP.

The First Step in Creating Life

Taken together, these two inorganic systems illustrate that early elements could form the beginnings of a metabolic network, the series of processes by which cells take nutrients from our food and convert them into compounds our bodies can use, such as ATP and DNA. In our bodies, enzymes regulate these processes by acting as catalysts — essentially choosing whether these reactions take place or not. Billions of years ago, iron may have served the same purpose, proving that metabolic networks can form in the absence of living cells. While no direct evidence that iron-catalyzed reactions in ancient oceans led to the rise of life exists, we now have theoretical proof that inorganic molecules could form organic compounds such as DNA. And, whether you’re a chicken or an egg, you still need DNA.