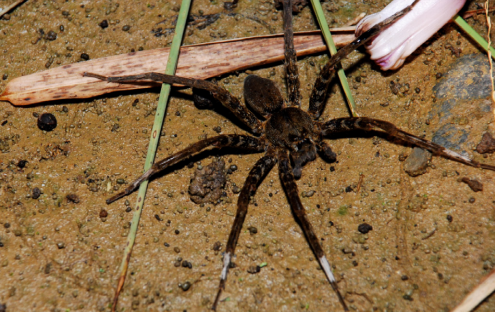 Maybe you can catch more flies with honey than with vinegar, but if you're trying to catch grasshoppers, the best method is bright white socks. The white patches on the front legs of certain Asian spiders make prey willingly flock to them—and scientists don't really understand why. Dolomedes raptor is known as a fishing spider. It lives near streams in the forests and cities of East Asia. Females are a little bigger than males—up to about an inch across—and the two sexes have different hunting strategies. Males actively pursue prey. But females hunt by perching on rocks at the edges of streams. They splay their legs out, often just touching the water's surface. Then they remain frozen this way for hours. If any tasty prey approach (semi-aquatic insects, or tiny fish or amphibians), the spiders nab them. Female D. raptor spiders are dark brown, with patches of bright white hairs on their front legs. Male spiders don't have these patches. The white hairs don't seem to be decorative—male spiders are indifferent to them. So scientists wondered whether the patches help female spiders with their particular hunting strategy. To find out, researchers from Tunghai University in Taiwan and the University of New South Wales in Australia first investigated the eyes of one of the spiders' favorite prey animals: the pygmy grasshopper Eucriotettix oculatus. These insects wade or swim in shallow water at night, munching algae—unless they're unfortunate enough to get near a fishing spider, in which case they get munched. Based on earlier studies of pygmy grasshoppers' eyes, the researchers developed a model of their vision. The insects have three types of photoreceptors, sensitive to green, blue and ultraviolet light. (This makes them "trichromats," like humans, although the colors we see are red, green and blue.) In the lab, the researchers measured the light reflected off D. raptor spiders' bodies and leg patches. According to their model, pygmy grasshoppers should be able to see the white patches on a spider's legs. But the rest of a spider's body likely blends in with the rock she's perching on. Next, the researchers went to a slow-moving forest stream in Taichung City, Taiwan, to observe the hunt in the wild. They had crafted dozens of dummy spiders out of brown paper; half the dummies wore leg patches made from white paper. They stuck these dummies to rocks along the stream, and set up cameras overnight to monitor how many insects came near the paper spiders. The researchers also experimented with live spiders and pygmy grasshoppers in a greenhouse. They trimmed the white hairs off of spiders' legs to compare how many grasshoppers they caught with and without leg patches. In both cases, the results were the same: spiders with leg patches caught more prey. On their video footage, the scientists counted how many insects came within a centimeter of a spider. Of course, if these spiders were made of paper, they didn't actually capture their prey—but in real life, any insect that wandered this close would be toast. Most of the prey that approached the spiders in the wild were pygmy grasshoppers. Two major questions remain, though. The researchers don't know why only females have white leg patches. And they don't know why pygmy grasshoppers are lured by a spider's white socks. It would make sense if this white patch imitated some signal the grasshopper looks for in another area of its life—but the researchers don't know what that signal would be. No matter why grasshoppers love white patches, these spiders have evolved to hijack a sensory quirk of their prey. A pygmy grasshopper that sees a white patch near the water may be powerless to resist swimming closer. And if it gets close enough, it won't have a chance to learn from its mistake. 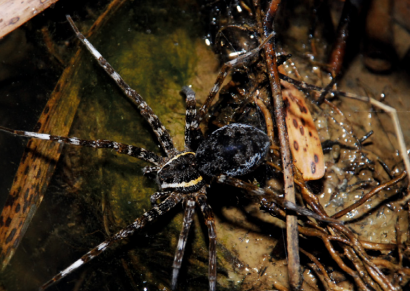