A particular set of rock paintings dating from more than 40,000 years ago don't seem to be made of paint anymore. According to a new study published in the journal Antiquity, the vibrant artworks were long ago colonized by colorful microbes, which serve as "living pigments" in the paintings. Lead researcher Jack Pettigrew, of the University of Queensland in Australia, explains:

"'Living pigments' is a metaphorical device to refer to the fact that the pigments of the original paint have been replaced by pigmented micro-organisms.... These organisms are alive and could have replenished themselves over endless millennia to explain the freshness of the paintings' appearance." [BBC News]

When the researchers analyzed the so-called Bradshaw rock artworks found in Western Australia's Kimberley region, they didn't find paint. Instead they found a black fungus, probably belonging to a fungi group known as Chaetothyriales, as well as a reddish organism that is suspected to be a species of cyanobacteria

Successive generations of these fungi grow by cannibalising their predecessors. That means that if the initial paint layer - from tens of thousands of years ago - had spores of the fungus within it, the current fungal inhabitants may be direct descendants. The team also noted that the original paint may have had nutrients in it that "kick-started" a mutual relationship between the black fungi and red bacteria that often appear together. The fungi can provide water to the bacteria, while the bacteria provide carbohydrates to the fungi. [BBC News] 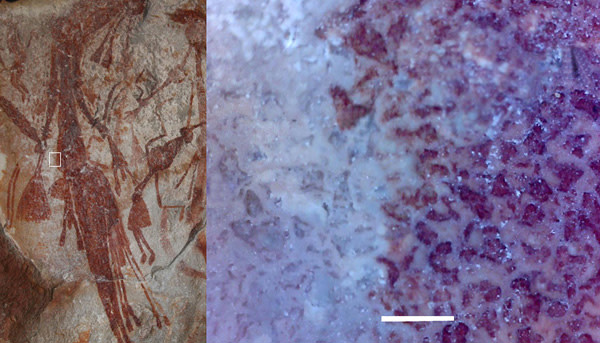 The constant refreshing of the microbes that make up the paintings may account for the difficulty researchers have had in dating the Bradshaw artworks. According to the study, these works have only been indirectly dated via their subject matter: they're thought to have been painted between 70,000 years ago, when the first boab trees

began growing in Australia, and 46,000 years ago, when the megafauna depicted in the paintings died out. Related Content: 80beats: Evidence of Smart, Jewelry-Making Neanderthals Is Challenged