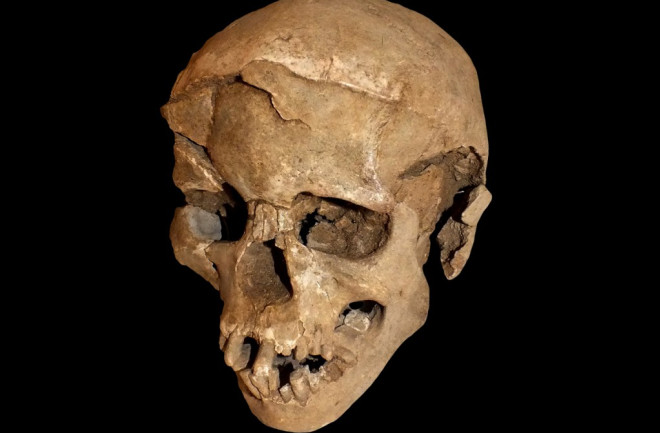 The skull of a man, found lying prone in the lagoon’s sediments. The skull has multiple lesions consistent with wounds from a blunt implement, such as a club. (Credit: Marta Mirazón Lahr, enhanced by Fabio Lahr) Archaeologists have found the oldest evidence yet of organized conflict, which they say is a precursor to modern warfare. Historians don’t agree on when humans first started waging real, organized warfare against each other. One school of thought says that war is a product of agriculture, with its stored resources and new ideas about ownership, but others argue that the capacity for war is buried much deeper in our evolutionary history. Now, the 10,000-year-old victims of a prehistoric battle in Kenya may provide evidence that war is a much older human habit than previously thought. A team of archaeologists led by Marta Mirazón Lahr discovered the fossilized skeletons of at least 21 adults and 5 children lying partially exposed at a site called Nataruk, a few miles from the present-day shores of Lake Turkana, in Kenya. “None of the bodies at Nataruk had been buried, and the position of the skeletons strongly suggests that we found them where they had fallen, or from where they were too injured to move,” says Mirazón Lahr. At least ten of the skeletons show signs of serious injuries in their final moments: fractures and cuts that hadn’t yet begun to heal when they died.

The victims were hunter-gatherers who fished and foraged the area around Nataruk during the early Holocene period, about 10,000 years ago. The place where they died would have been a foraging camp, probably only occupied during certain parts of the year. Back then, Nataruk was along the shore of a lagoon, a marshy area surrounded by woodland, offering the perfect setting for hunting and fishing, as well as an abundance of clean drinking water. “The edge of the lake at that time must have been an amazing place to live – but also dangerous, as we have also found several fragments of human fossils at other sites with evidence of having been eaten by carnivores,” says Mirazón Lahr. Carnivores weren’t the only danger. The 27 people whose remains the team excavated at Nataruk died by human hands wielding clubs, knives, and projectiles. They published their findings Wednesday in the journal Nature.

The projectile points are the clearest evidence that this was an organized act of violence. Projectile points are a “hallmark of inter-group conflict,” according to Mirazón Lahr, since more personal fights would have been settled at close range with fists, knives, or clubs, rather than ranged weapons. Two of the points were made from a hard black stone called obsidian, which isn’t common in the area around Nataruk – a sign that the attackers may have come from somewhere else. Mirazón Lahr and her colleagues think they may have come from the east, near the Suguta Valley, by canoe or small boat, in what was, for the time, a well-planned raid. “What happened at Nataruk seems to have been a planned attack by one group on another, rather than an accidental hostile encounter between two groups,” she said. “The group who attacked the people at Nataruk was carrying weapons that would not normally be carried while hunting and fishing. The lesions show that clubs of at least two sizes were used, indicating that more than one of the attackers were carrying them. The attack combined distance and close-proximity weaponry, suggesting premeditation and planning.”

Today the bones of the victims silently tell the tale of the quick, brutal fighting on the banks of the Holocene lagoon. One man took at least two projectiles to the head, and a blow to the kneecaps with something blunt, like a club, before falling face-first into the lagoon. When Mirazón Lahr and her colleagues found him 10,000 years later, the obsidian projectile point was still lodged in his cranium. Another man was hit in the back of the head with a blunt object and fell face-down into the water, probably with a broken neck.

A man found in the lagoon with fractures to the skull, likely the result of blunt force. (Credit: Marta Mirazón Lahr, enhanced by Fabio Lahr) A woman’s hand still bears the mark of a futile effort to defend herself; her right hand is fractured, probably the result of blocking a club strike or catching herself as she fell. Something sharp – a stone knife or an arrowhead – had slashed her right cheek deeply enough to cut into the bone. Four people at Nataruk, including a woman in her last trimester of pregnancy, were found with their wrists crossed as though they had been bound. “I think they were all injured, but perhaps not immediately killed, and were therefore restrained,” says Mirazón Lahr. “We can never be sure if they were in fact bound, but to find four cases in which the hands cross over the wrists among people who were left to die unburied, suggests they were.”

A woman, found reclining on her left elbow, with fractures on the knees and possibly the left foot. The position of the hands suggests her wrists may have been bound. (Credit: Marta Mirazón Lahr) Others may have been captured, or escaped. With the exception of one teenage girl and four infants found near the remains of four adult women, there are no children or teenagers among the skeletons at Nataruk, but the group likely would have included at least some young people. “Whether they managed to escape, or were taken by the attacking party, we will never know,” she said. It’s also not clear whether the people at the site fought back. If any of the attackers are among the dead, said Mirazón Lahr, “they would be very few if any – not the women, not those that seem to have been bound, and not those hit by projectiles.”

Nataruk would have been a prime foraging site, and the attackers probably came to take resources from the people who occupied it. They could have been after food, such as gathered nuts or fried fish, or they may have come to take women and children for their own band, an occasional practice among modern hunter-gatherers such as the Tiwi in Australia. They may even have sought to take control of the territory itself. “This shows that two of the conditions associated with warfare among settled societies – control of territory and resources – were probably the same for these hunter-gatherers, and that we have underestimated their role in the prehistoric life of hunter-gatherers,” said Mirazón Lahr. There are other hints of a violent past around Lake Turkana. Skeletons with embedded projectile points have been found at three other sites in the region. “This tells us that such attacks happened multiple times, and were part of the life of the hunter-gatherer communities at the time,” Mirazón Lahr said. “Nataruk is extraordinary for having preserved the uninterred bodies of many individuals from what was probably not an unusual event in the lives of hunter-gatherers at the time.”

“I believe that the key to prehistoric conflict was population density – very low numbers may have inhibited warfare, as it would be too costly to both defend and attack, while in periods of food abundance, inter-group conflict may have been indeed common, and that these conditions have been part of our evolutionary past for a very long time.

“At the moment, Nataruk is the oldest scientifically dated example of inter-group conflict among nomadic hunter-gatherers. However, if we are correct in our interpretation, warfare and conflict should be much older than Nataruk.”

“The injuries suffered by the people of Nataruk, men and women, pregnant or not, young and old, shock for their mercilessness,” says Mirazón Lahr. “What we see at the prehistoric site of Nataruk is no different from the fights, wars and conquests that shaped so much of our history, and indeed, sadly continue to shape our lives.” However, she added, “But we should also not forget that humans, uniquely in the animal world, are also capable of extraordinary acts of altruism, compassion and caring – clearly both are part of our nature.”