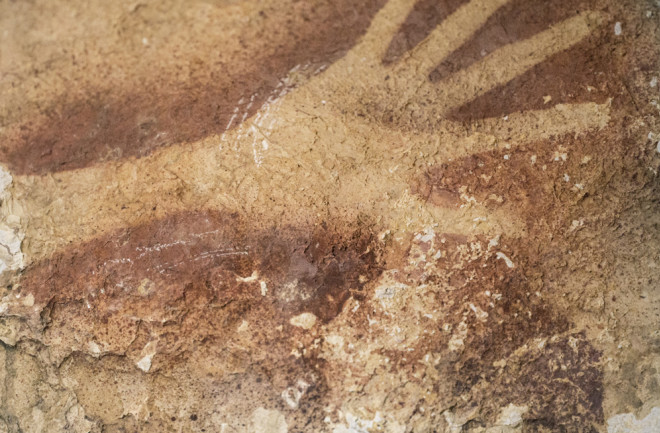 Hand stencils. Credit: Kinez Riza Humans are intrinsically artists. Cave paintings and hand-carved figurines found in France, Spain and Italy suggest that Homo sapiens were crafting 35-40 thousand years ago. But, up to now scientists have been puzzled by the lack of equally old art in South Asia and the Far East, where humans dwelled at the same time as their artistic European counterparts. Now the mystery has been put to rest. Archaeologists have recently determined that a series of stencils and paintings in prehistoric caves on the Indonesian island of Sulawesi are some of the oldest in the world, dating back nearly 40,000 years.

Located in the caves of the Maros region of the island, the paintings were first discovered in the 1950s. From human hand stencils to large paintings of native animals, the Maros cave art appears in 90 different sites. However previous analysis determined the paintings to be recent creations — less than 10,000 years old. Researchers calculated that the limestone’s high levels of erosion caused by the harsh tropical environment would have destroyed any older artistic endeavors.

But new scientific methods have allowed archaeologists to better estimate the age of the artwork. Maxime Aubert and colleagues dated the creations by analyzing mineral deposits found on top of the paintings. These minerals formed calcite nodules called coralloid speleothems, also known as “cave popcorn” due to their bulbous shape. The cave popcorn contains trace amounts of the chemical element uranium. Using a small electric saw the researchers collected 19 samples from 14 individual motifs, comprised of 12 hand stencils and two figurative drawings. By measuring the radioactive decay of uranium in the calcite above and below the paint layer, scientists were able to determine the minimum and maximum ages of the art.

Left, Babirusa ('deer-pig') and hand stencil. (Kinez Riza) Right, a modern day deer-pig. (mshehan via Flickr) The findings, reported in Nature this week, are remarkable. One hand stencil is at least 39,900 years old, making it the oldest known hand stencil in the world. And, a painting of a “pig-deer” (Babyrousa) was created at least 35,400 years ago — one of the earliest dated figurative depictions worldwide. Scientists are eager to determine if the rock art tradition developed independently in the Indonesian and European regions, or if the first humans brought the tradition with them from Africa. Answering that question may help us understand the very earliest origins of art-making in the human lineage, and shed light on how our oldest ancestors experienced the world.