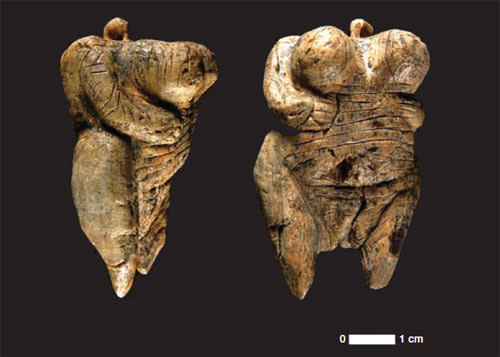 This sculpture may look a little bit like a roast chicken, but don't let that distract you - it's an incredibly important artistic find. This small figurine is arguably the oldest representation of the human body yet discovered.

The figure is clearly human, with short arms ending in five, carefully carved fingers, and a navel in the right position. But its most obvious features show that it depicts a woman, and very explicitly at that. She has large protruding breasts, wide hips and thighs, accentuated buttocks and pronounced vulva between her open legs. In contrast to these exaggerated sexual features, her arms and legs are relatively small and her head has been left out entirely. It was replaced with a carefully carved ring that probably allowed the figure to be suspended like a pendant.

The figurine is very similar to the so-called Venuses of Europe's tool-making Gravettian culture. These prehistoric works of art also had crazily proportioned breasts, buttocks and genitals, as well as curiously downplayed heads, arms and legs. They were created between 22,000 and 27,000 years ago, but this new find is much older than that.

It was unearthed by Nicholas Conard from the University of Tubingen, who found the Venus three metres underground, within the Hohle Fels Cave in southern Germany. It's just 6cm long and was carved from the solid ivory tusk of a mammoth. Judging by carbon-dating measurements of other finds from the dig site, Conard estimates that it was fashioned at least 35,000 years ago, although it could well be millennia older.

The Venus was found in six separate fragments, recovered over a week in 2008. Despite being shattered, most of the pieces have been found and reunited, with only the left arm and shoulder still missing. Conard still hopes to recover these missing fragments as the cave dig continues. Like other Venuses, Conard suggests that his latest find could be a symbol of fertility. She's also adorned in other markings, including horizontal lines around her waist that could possibly represent a wrap or piece of clothing.

The Venus hails from the Aurignacian period, which saw the demise of the European Neanderthals and the settling of genetically modern humans in their place. The German caves where the Venus was buried have yielded a treasure trove of human creativity from this far-gone culture, including the world's oldest unmistakeable musical instruments -flutes made from the bird bones, joined by mammoth ivory.

Archaeologists have also found a veritable art gallery of 25 other Aurignacian figurines, but all of these depict animals or half-human, half-animal creatures. The Venus is unique, for it is older than all of these earlier finds and it's the first one that's clearly human.

It's quite probably the oldest human figure on record. There are other contenders to the title including rust paintings in Italy's Fumane Cave (although these may again depict human-animal hybrids) and those in France's Chauvet Caves. There is a caveat - Conard admits that the carbon-dating estimates are ambiguous. Nonetheless, the figurine was found at the bottom of sediment that was deposited during the Aurignacian and that shows no signs of having been disturbed since then.

According to Conard, the mere existence of the Venus radically changes our view of the origins of prehistoric art. Modern humans evolved in Africa and the oldest art there is abstract - geometrical designs that were created between 75,000 and 95,000 years ago.

But portraying the human figure appears to have been a European invention, achieved only when our ancestors migrated northwards. In Africa, the oldest figurative art is a set of seven paintings on stone blocks from Namibia's Apollo 11 cave, and these were created just 25,500 to 27,500 years ago. Archaeologist Paul Mellars believes that Conard's Venus pinpoints south Germany as the "the birthplace of true sculpture in the European - maybe global - artistic tradition".