If you want to celebrate Halloween the historically accurate way — by keeping the evil spirits away — here's a list of popular apotropaic items. 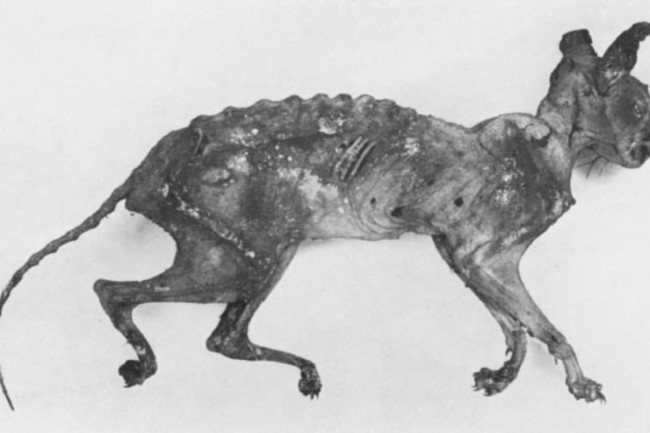 Mummified cats may have been concealed behind walls to protect against witchcraft. (Credit: Trustees of the British Museum. Howard; Man, Volume 51, November 1951)

I've done some research and have three historically-accurate recommendations: You could cut up an old boot, mummify a cat or fill a bottle with nails and urine. They're no pumpkins, but the goal of these sometimes macabre items was less about bringing the spook than keeping it away. These are items used historically to ward off witches and malevolent forces.

From the 1500s onward, Europeans and later Americans concealed such objects under floors, behind walls and in other inaccessible nooks, to protect a building’s inhabitants from the dark arts. Today, centuries later, the artifacts are being found and provide physical evidence of past people’s supernatural beliefs.

Although historical documents discuss witches and magic, written sources represent the views of the literate minority — a slim slice of popular opinion. By studying concealed cats and other anti-sorcery devices, archaeologists get a glimpse at the lives of the other 99 percent. 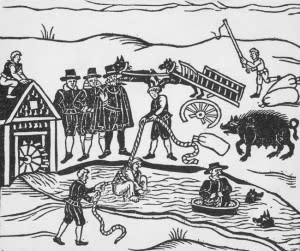 Supposedly apotropaic (evil-averting) objects included desiccated cats, horse skulls, well-worn shoes and witch bottles — ceramic or glass containers typically filled with urine and sharp objects. Most of these artifacts have been discovered accidentally during construction projects, and then kept by the finders as curiosities or donated to localmuseums. This makes them tricky material for archaeologists, who usually rely on careful excavations to document the context of finds, which provides far more information than isolated objects.

However, some researchers have surveyed hundreds of museums and private collections, to compile and analyze occult artifacts (here, here). They’ve also compared these results to written history, to see how people’s professed beliefs line up with with their actual behavior. The work shows that fear of witches persisted in private long after public concern subsided. It’s well known from historical records, that witch hysteria peaked during the 16th and 17th centuries, when the witch trials occurred, resulting in tens of thousands of executions.

However, people were hiding counter-sorcery artifacts in their homes before, during and long after this period. For instance, in a survey of British collections, 40 percent (159 out of 390) of the anti-witch objects that could be accurately dated were used after 1700. And some were used well into the twentieth century.

So, if you want to celebrate Halloween the historically accurate way — by keeping the evil spirits away — here's a list of popular apotropaic items.

According to texts, as far back as the 1600s, witch bottles served as remedies for certain diseases, including kidney stones and epilepsy, believed to be caused by sorcery. A ceramic or glass container was filled with pee from the victim, along with needles, nails and other sharp items. This was supposed to inflict bladder pain on the culpable witch or wizard until they relented their sorcery. 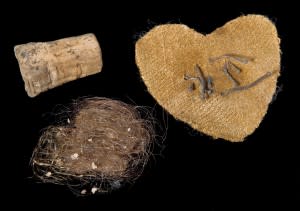 For example, in the 1671 book Astrological Practice of Physick, folk doctor Joseph Blagrave gave instructions: “Stop the urine of the Patient, close up in a bottle, and put into it three nails, pins or needles, with a little white Salt, keeping the urine always warm…it will endanger the witches life: for I have found by experience that they will be grievously tormented making their water.”

Over time, the practice may have evolved alternative purposes, such as general household protection or love spells. And the recipe expanded, including clippings of hair and fingernails, hearts made of cloth and animal bones. Nearly 200 witch bottles have been found in Great Britain. In the U.S., fewer than a dozen have been recovered, but their use is mentioned in texts dating from 1681 to as recently as 1954.

Researchers have tallied several hundred domestic cats found concealed in buildings. While it’s possible some ended up there accidentally — crawling in and becoming trapped — many are clear cases of deliberate immurement: The cats were often preserved, through mummification, taxidermy or other means, and propped into action poses, perhaps with one paw outstretched, about to pounce on a mouse (also mummified). And most of the felines were sealed inside the structural features of buildings, probably during the original construction. 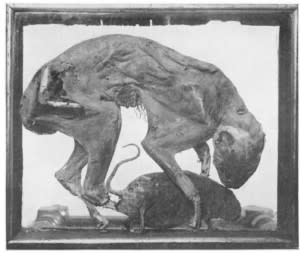 Unlike witch bottles, historic texts say little about the specific purpose of concealed cats. Archaeologists have proposed they served as good-luck sacrifices for new buildings or to scare away vermin. However, considering that rats don’t fear dead cats (they’re actually prone to eat them), some researchers contend the cats were meant to scare supernatural vermin — witches assuming the form of rodents.

Old shoes were the most common item people hid in homes and public buildings. To keep track of all of them, the Northampton Museum in England maintains the Concealed Shoe Index, which currently has around 1,900 entries. Nearly all the shoes were well-worn and sometimes intentionally destroyed, such as boots cut in half. In most cases, a single shoe was found, but some deposits have many. In 2010, nearly 100 single shoes — all missing their mate — were discovered under 300-year-old ruins of a cottage in northwest Wales. Few historic writings mention the practice, but researchers suggest — like witch bottles and cats — concealed shoes were meant to protect inhabitants from sorcery.

The belief that ratty footwear repels evil spirits may stem from an English tale, originating around 1300, in which a clergyman named John Schorn trapped the Devil in a boot. The oldest concealed shoe discovered so far comes from soon after, a find dated to 1308 from Winchester Cathedral in Hampshire, England.

While the practice likely originated in the Middle Ages, it persisted well into the modern era, with most finds from America dating to the early 19^th century. By then, concealed shoes may have evolved into a builder’s tradition, to grant luck to newly erected structures. In any case, the beat up shoe is certainly your easiest option for a Halloween decoration. Though, it does lack the showmanship of peeing in a bottle or mummifying a cat.

Planet EarthThe Pyramid of Djoser: The World's Oldest Pyramid Is Often Overshadowed
Recommendations From Our Store