Power lines disrupt the magnetic alignment of cows and deer

Farmers and herders have known for centuries that herds of cattle have an uncanny ability to all point in the same direction. Last year, a group of German and Czech scientists discovered the reason behind this alignment - unbeknownst to humans for thousands of years of domestication, these animals have a magnetic sense. The team used Google Earth satellite images to rule out alternative explanations like the wind and the sun, and show that cow and deer herds tend to point towards magnetic north like a living, hoofed compass needle.

Now, the same team have found that high-voltage power lines, which emit strong magnetic fields of their own, disrupt the orientation of cattle and deer. Near these lines, their neat alignment goes astray and they position themselves at random. This disturbance becomes less and less pronounced as the animals stray further away from the power lines. This is yet further proof that cows and deer have a magnetic sense that's only just become apparent to us.

A wide variety of animals navigate using the Earth's magnetic field as a guide, but until recently, bats and rodents (including hamsters, mice and mole rats) were the only mammals to demonstrate this sense. In fact, the ability may be much more widespread, for these groups are small and easily tested in the kinds of laboratory experiments that would be impossible with larger creatures. To study the senses of cows and deer, Hynek Burda from the University of Duisberg-Essen was forced to be more creative.

He used pictures of herds of animals taken by Google Earth's satellites to show that they line up according to the North-South poles, regardless of the position of the sun and in parts of the world with very different prevailing winds. In this new study, he made use of large magnetic anomalies caused by the presence of power lines to see if the animals' behaviour was affected. 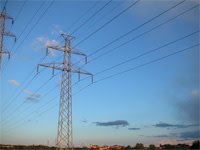 Electrical pylons deflect the Earth's magnetic field around them in a radius of up to 30 metres. The lines running between them produce what are known as "extremely low-frequency magnetic fields" (ELFMFs). These are strongest at the mid-point where the line sags closest to the ground and decrease exponentially the further you get from the line.

Burda looked at satellite images of 153 herds of European cattle grazing within 150 metres of power lines, and found that they had no preference in their directions. In contrast, images of 111 herds in open pastures showed that they were significantly aligned along the north-south axis.

The same was true for roe deer, which the team observed first-hand. They witnessed 201 herds grazing in open areas and saw that they faced along a rough north-south axis. However, 47 herds straying near power lines were randomly aligned. Neither species was lining up to the direction of the cables themselves. These observations are powerful indicators that the animals' stances were not primarily set by the positions of the sun.

Their positions even varied at different distances from the power lines, becoming more and more natural as the intensity of the man-made magnetic fields fell. If the power lines were running in an east-west direction, individual cows directly underneath tended to face in the same east-west direction, but those standing further and further away progressively shifted to the typical north-south alignment. Likewise, animals standing under north-south power lines also tended to face in a north-south direction, although their deviation from this standard direction became less and less as they got further away.

This new study provides yet more support for the magnetic sense of cows, but why and how they do it is still a mystery. Other mammals such as mole rats and bats rely on magnetic crystals called magnetite; pigeons carry magnetite in their beaks too.

Another method - the so-called "radical-pair" hypothesis - involves a light-sensitive molecule called cryptochrome, which is used by light-detecting cells in our eyes to sense blue light. When cryptochrome is activated, it forms a pair of "free radicals" - molecules with lone, unpaired electrons. Magnetic fields can affect whether these electrons "spin" together or not, and that in turn affects how long cryptochrome stays active for. Through cryptochrome, animals may actually be able to see magnetic fields as visual patterns.

The benefits that cows and deer gain by detecting magnetic fields are just as unclear as the means through which they do it. There are many possibilities. Synchronising the direction of the herd could make it easier to graze efficiently or escape predators effectively. It could help them to navigate as they move to fresh pastures (although deer also align magnetically while they're resting). The most intriguing reason of all, which the group put forward in their last paper, is that magnetic alignment could make some bodily processes function more effectively.