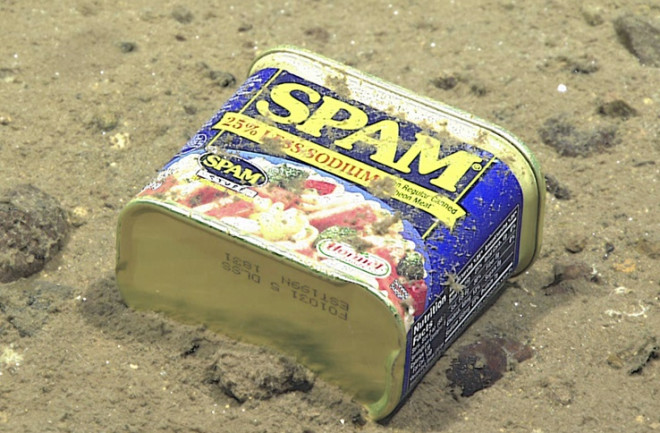 A can of Spam found deep in the Mariana Trench. (Credit: NOAA Office of Ocean Exploration and Research) We already knew that noise pollution invades the Mariana Trench, but it seems that another, more dangerous, form of pollutant has entered the deepest place on Earth as well. Researchers from the University of Aberdeen went to arguably the most removed place on the planet and still found traces of chemical pollutants in creatures living miles below the ocean surface, as Naturereports. Speaking at a conference in Shanghai in early June, the scientists presented evidence of both PCB's and another class of toxic chemical called polybrominated diphenyl ethers (PBDE's) in small crustaceans gathered from the deeps.

The researchers conducted their study in 2014, when they used unmanned devices to trawl both the Mariana Trench and the Kermadec Trench, which is near to New Zealand. They found significant levels of both chemicals in the bodies of amphipods — small shell-less crustaceans — collected from between 22,000 and 32,000 feet beneath the waves. In fact, levels of these chemicals exceeded levels of PBDE's near the surface in New Zealand and levels of PCB's were actually higher than those found in two of China's most polluted rivers. There was some disparity in the data as well: The Mariana Trench saw higher concentrations of PCB's than the Kermadec Trench, while the Kermadec had five times more PBDE's than the Mariana. The researchers attribute the levels of PCB's in the Mariana Trench to Asian plastics manufacturers on the nearby coast, as well as the presence of the North Pacific Gyre, a broad current that circulates between Asia and North America and sweeps directly over the Trench.

PCB's have been banned for several decades now in most countries, and PBDE's, used in fire retardants, are beginning to see restrictions as well. However, both chemicals possess quite a long lifespan as they are hard to break down. And, while the deepest parts of the oceans may be inaccessible to us, they are actually a natural resting place for the world's pollutants. Just as millions of tons of plastic have ended up trapped in the Great Pacific Garbage Patch, smaller bits of plastic sink to the bottom of the ocean, where they can be ingested by sea life. And because these places are so deep, anything that enters rarely leaves. This makes the ocean depths a kind of universal repository for the garbage and pollutants that enter the ocean — meaning that they may actually be more polluted than the surface in some cases, and will only get worse. Deep-sea trenches are of interest to researchers because their unexplored depths likely contain a wealth of new species, some of which could hold potential for new drug breakthroughs and other research opportunities. They could also play a role in helping to regulate climate change by acting as a carbon sink. An expedition sponsored by the NOAA is currently probing the depths of the Mariana Trench to gather more information about the species that live there and the ecosystem that supports them. You can check out a gallery of some of the unique life forms they've come across here.