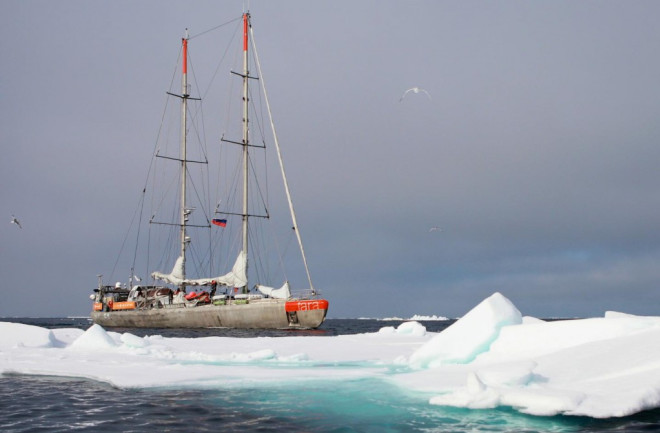 Researchers sail on the ship Tara during their Polar Circle expedition in 2013. (Credit: A. Deniaud Garcia/ Foundation Tara Ocean) The oceans are crawling with viruses. An international team of researchers surveyed the world’s oceans from pole to pole, sampling the waters for the microorganisms and they found nearly 200,000 of them. Although we mostly think of viruses in terms of being sick, in the oceans, viruses and other marine microbes have an outsized impact on marine ecosystems. Their role is so large in fact that the researchers say the microorganisms can help predict how the oceans will respond to climate change. "This new understanding of viruses ... may help scientists better understand how the oceans will behave under the pressures of climate change," Ahmed Zayed, a graduate student in microbiology at the Ohio State University in Columbus, who authored the new research, said in a statement.

Oceans soak up about half the carbon dioxide humans emit into the atmosphere. But microbes, which make up about 60 percent of the ocean’s biomass, control much of that carbon’s fate, says Matthew Sullivan, a virus ecologist at Ohio State, who led the new research. Viruses, for example, kill 20 to 40 percent of the ocean’s bacteria every day, releasing the carbon and other nutrients that were inside the bacteria, and creating food for marine life in the process. “We need to understand viruses so that we don’t short-circuit this carbon pump and maybe even to turn them to our advantage as we seek bold and innovative solutions to help us survive climate change,” Sullivan said. That prompted Sullivan and his team to undertake a massive investigation of the world’s oceans from a series of expeditions. On the first two voyages, between 2009 and 2011, the team collected around 100 seawater samples from around the world and found about 1,500 viruses. At the time, the results, which were published in 2016, tripled the number of known viral populations in the oceans. But the most recent investigation from an expedition to the Arctic blows that number out of the water. In the new study, the researchers report the results of the Tara Oceans Polar Circle expedition. In 2013, researchers circled more than 1,500 miles of the Arctic Ocean, collecting seawater from different depths at 20 sites. After filtering the water and separating out viruses, the scientists extracted DNA and sequenced the genetic material. They added this new batch of samples to their previous collection from the first two voyages, bringing the total to 145 samples from across the world’s oceans.

When the researchers analyzed the new virus collection, they identified nearly 200,000 viral populations. The discovery “expand[s] the number of known viral populations more than tenfold,” Ann Gregory, a graduate student in Sullivan’s lab who co-led the effort, said in a statement. The scientists used the new catalog to draw the first global map of ocean virus diversity. The map revealed that virus diversity is unexpectedly high in the Arctic, the researchers reported on April 25 in the journal Cell. The scientists had anticipated virus diversity to be low in the Arctic because there's less biodiversity among larger organisms both on land and at sea in toward the poles. “We were surprised to see the Arctic as a biodiversity hotspot, which is particularly relevant since these waters are among the fastest changing on the planet due to climate change,” Sullivan said. The finding suggests that “the Arctic could be an unrecognized 'cradle' of viral biodiversity beyond the tropics and emphasizes the importance of these drastically climate-impacted Arctic regions for global biodiversity," Zayed said.