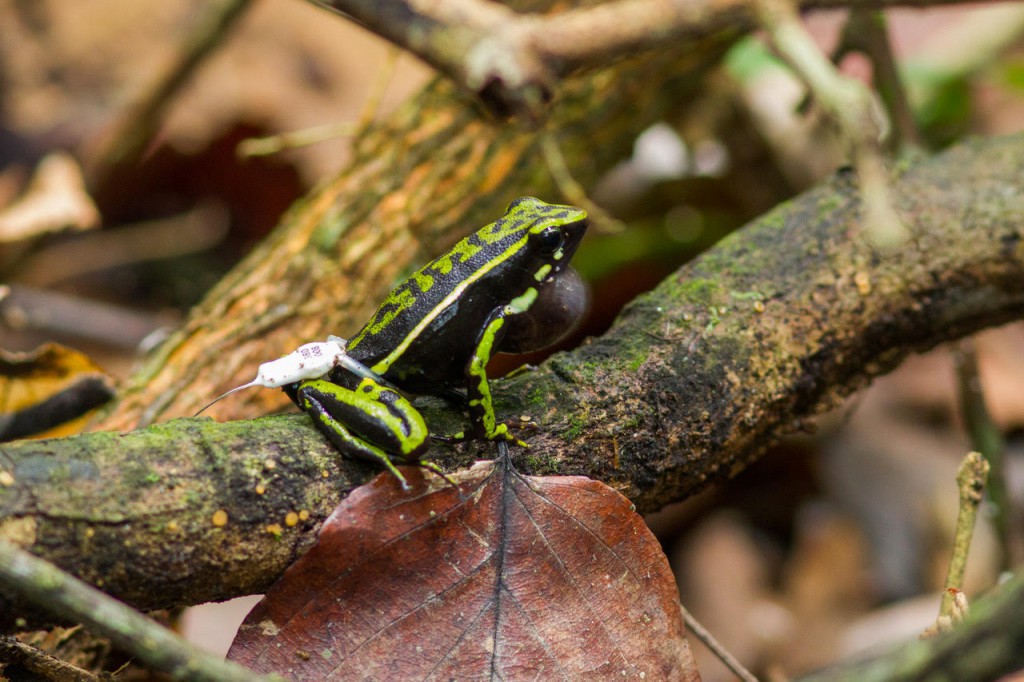 When researchers deposited the little fanny-pack-wearing amphibians deep in the jungle, they were already planning a rescue mission. The poison frogs were disoriented, half a mile from home, and in dense underbrush they'd never seen before. Yet, impossibly, the frogs turned themselves in the right direction. They hopped straight back to their home turf. And the results would no doubt teach scientists something about animal navigation—if they had any idea how the frogs pulled it off. Most male poison frogs stick to one patch of territory on the rainforest floor, defending it against intruders. Several species are known to have homing abilities: when carried away from their homes, they return, though it's not clear how. The University of Vienna's Andrius Pasukonis started studying frog navigation with a species called (really) the brilliant-thighed poison frog, Allobates femoralis. In French Guiana, he found that these frogs could reliably find their way home from 200 meters away, and sometimes from up to 400 meters. But Pasukonis was having a hard time tracking the frogs over longer distances. The brilliant-thighed poison frog is tiny, only an inch or so long, which limits the types of tracking devices it can carry. So Pasukonis and coauthor Matthias-Claudio Loretto went to Peru to study another frog: the three-striped poison frog, Ameerega trivittata. This species is about twice the size of the brilliant-thighed poison frog. That meant the animals could carry miniature radio transmitters—and researchers could put their skills to a real test. The team captured male frogs and rigged little waistbands for them out of silicone tubing. To these, they attached miniature radio transmitters. (They had to be very careful of the fit, Pasukonis says, because a poorly fitted band could fall off or damage a frog's fragile skin.) Thus outfitted, 12 frogs prepared for their journeys. The researchers put one frog at a time into their frog-disorientation device, a.k.a. this bucket: 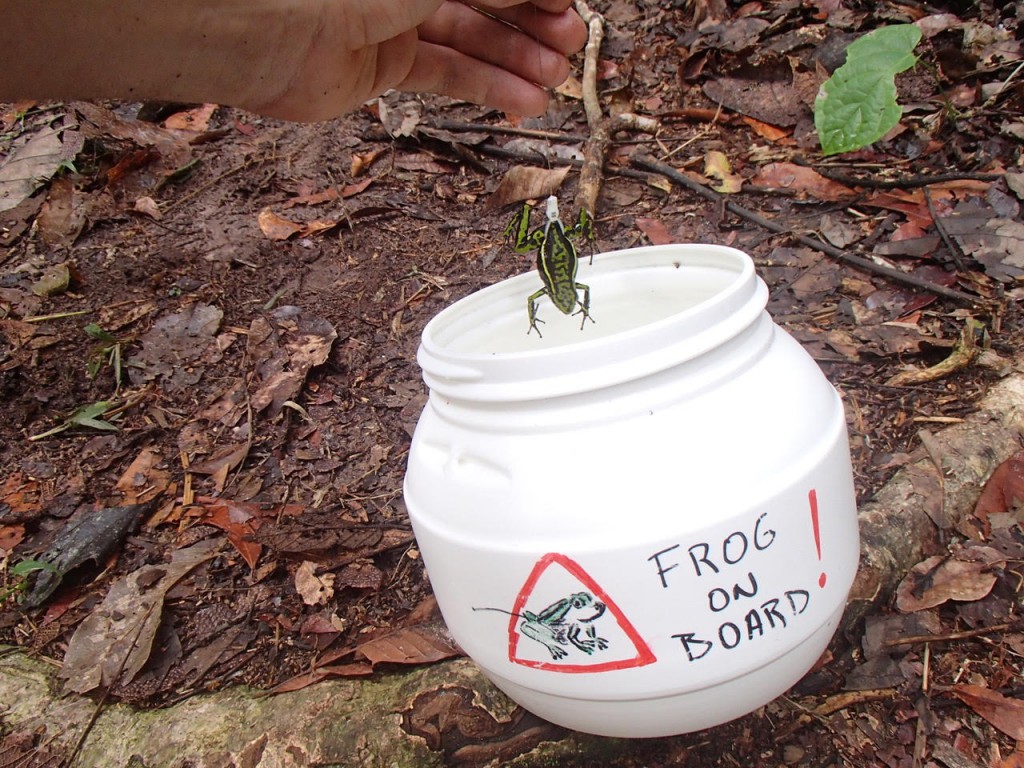 The frogs were spun around several times, then carried by an indirect route to their release sites. The sites ranged from 200 to 800 meters away from the frogs' home territories. After letting the frogs go, Pasukonis and Loretto monitored their locations for up to 12 days. The scientists wanted to find the upper limit of the frogs' homing abilities. They designed the experiment "fully expecting that no frogs from 800 meters will return home," Pasukonis says. But "to our great astonishment," he says, 10 of 12 frogs made it back, including the frogs that were farthest away. What surprised him even more, Pasukonis says, was that frogs homing from a half-mile away were almost as accurate as the frogs homing from just 200 meters. "Most frogs pick the correct homeward direction from the beginning and continue in a close-to-straight line," he says. They didn't all get back in a hurry—one male got home in under two days, while others took up to 11 days. But only two frogs needed rescuing. Pasukonis says that based on their performance, the frogs could probably home over longer distances. "It seems likely that we have not yet reached their limit." What's perplexing, he says, is that he released frogs outside of their home ranges. As far as he knows, the areas of rainforest where he dropped the frogs out of the bucket were totally unfamiliar to them. Yet somehow the frogs knew which way to hop home. "They are moving through dense rainforest understory and trying to find a small 'home patch' of the forest that to our eyes looks just like any other place," he says. It seems unlikely that visual landmarks would be much help. Maybe the frogs build mental maps of the jungle using sound, smell, magnetic cues, or a combination, Pasukonis says, and can somehow extrapolate those maps to places they've never been. "It remains a real mystery, which I find both very exciting and a little frustrating," Pasukonis says. "Every hypothesis we come up at the moment seems to be more far-fetched than the other, but these frogs are apparently doing something far-fetched." Photos: Andrius Pasukonis.