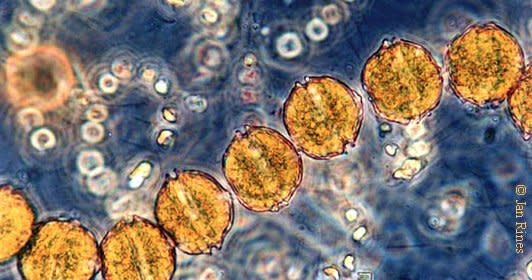 The oceans are full of animals that seek safety in numbers, gathering together to confuse predators. But some opt for the opposite strategy. Alexandriumis part of the sea’s collection of plankton. It’s a single-celled creature but it can create colonies by amassing together in long chains. At their most extreme, these colonies can form large swarms to produce harmful red tides. As chains, Alexandrium swims and grows faster, but it is vulnerable to predators such as copepods – small relatives of crabs or shrimp. Erik Selander from theTechnical University of Denmark found that when the chains detect the chemical traces of copepods, they break apart. By turning back into single cells, they make themselves harder to find. They also swim at a slower pace to avoid creating telltale movements in the water. When threatened by predators, these plankton enter stealth mode. Alexandrium isn’t the only ocean resident to use a split-and-survive strategy. The larva of the sand dollar avoids being spotted by splitting itself into two identical clones. Sand dollars are relatives of sea urchins. An adult is a flat, round disc but a larva (known as a pluteus) is a very different six-armed creature. A pluteus can swim but not very quickly, and certainly not fast enough to escape a hungry fish. Dawn Vaughan and Richard Strathmann found that if a pluteus detects the smell of a fish, it clones itself in two. It grows a small bud that detaches and becomes a second genetically identical larva. The two clones are half the size of the original, each just an eighth of a millimetre across. Like Alexandrium, the sand dollar also has a stealth mode, and one that involves virgin birth! Reference: Selander, Jakobsen, Lombard & Kiørboe. 2011. Grazer cues induce stealth behavior in marine dinoflagellates. PNAS http://dx.doi.org/10.1073/pnas.1011870108 Vaughn, D., Strathmann, R.R. (2008). Predators Induce Cloning in Echinoderm Larvae. Science, 319(5869), 1503-1503. DOI: 10.1126/science.1151995Image by Tashiror