Not Exactly Pocket Science is a set of shorter write-ups on new stories. It is meant to complement the usual fare of detailed pieces that are typical for this blog.Chimp see, chimp do – back-scratching technique passes among disabled chimps Tinka’s hands are paralysed. His fingers are permanently flexed, he can’t bend his wrists and to top it all off, he has a chronic skin condition. His body itches frequently and without dextrous hands, he can’t scratch himself properly. Fortunately, Tinka is an ingenious fellow. He uses his motionless hands to grab a liana (a thick, woody vine) and, stretching it taut, he rubs his itching body against it. Tinka’s a chimpanzee and he has found a way of getting to those hard-to-reach places, like a human towelling their back. Tinka’s a member of the Sonso chimp community in Uganda, which has high rates of disability, inflicted by man-made snares. The snares were intended for duiker and bush pig, but with hundreds in the area, some chimps inevitably got caught. The snares have been removed but not before they inflicted permanent handicaps on a third of the Sonso chimps. But from this tragedy came an opportunity to study the spread of cultural traditions in wild chimps – an opportunity that’s been seized by Catherine Hobaiter and Richard Byrne form the University of St Andrews. It’s clear that chimps can pick up new traditions from one another in captivity but their ability to do so in the wild is unclear. In natural conditions, it’s very hard to spot the birth of a new behaviour and to identify the individual who started it. It’s also difficult to work out if others are copying the innovator or just performing acts that were already within their repertoire. But Tinka bucks the trend. His liana-scratch technique is his invention. No other chimp in Sonso, or anywhere else in Africa, does the same thing. And Hobaiter and Byrne have found that at least 6 other chimps have taken up the technique, all of whom lived in the same area as Tinka. There’s no element of active teaching here. After merely watching Tinka perform his special move, the apeing apes could do it themselves sometime later. Chimp see, chimp do. What’s more, many of these imitators aren’t handicapped and the technique doesn’t seem to offer them any benefits – they could just scratch or groom themselves if they wanted. Hobaiter and Byrne think that this is just a “behavioural fad”, reflective of the chimpanzee’s natural predilection for copying its peers. 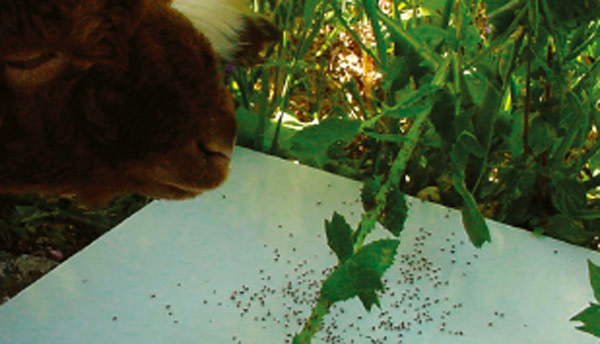 Aphids drop and roll when they detect mammal breath For a colony of aphids, there can be few fates as humiliating as being suddenly eaten by a passing goat. Plant-eating mammals pose a great threat to plant-eating insects. One chomp can unwittingly take out an entire colony. But as hungry mammals get closer, they give off a warning –hot, wet breath. Pea aphids take this as a cue to stop, drop and roll – they let go of their plant en masse and fall away from the jaws of death. Moshe Gish discovered this unusual strategy by allowing a goat to feed on alfalfa plants infested with pea aphids. He found that, at the last minute, two-thirds of the colonies dropped to the ground. When he flicked the leaves, only a quarter of the colonies dropped off and when he cast a shadow overhead, they did nothing. It was the animal’s breath that did it. The aphids also drop when they sense predators like ladybirds, but they do so more quickly and consistently when they sense mammal breath. Gish could even make individual aphids abandon leaf by directing a puff of goat or human breath at them using a tube. By playing around with these artificial puffs, he found that it wasn’t the presence of any particular chemical that did the trick, but the combination of heat and humidity. This is the first time that anyone has found an animal that defends itself against being accidentally eaten by plant-eaters. The ability to detect mammal breath isn’t unique to aphids though – mosquitoes use the same skill to find a blood meal, while other insects and arthropods respond to the hot and humid vapours by releasing toxic chemicals. But for the generally defenceless pea aphid, mammal breath means only one thing: drop or die. Reference: Current Biology, citation to be confirmed