Gabon fossils are earliest traces of multicellular life... or are they? These unassuming fossils may be some of the earliest known examples of complex life on Earth, composed of many cells (like animals and plants) rather than just one (like bacteria). They were uncovered in Gabon by a Abderrazak El Albani from the University of Poitiers, and they’re around 2.1 billion years old. They have been preserved in remarkable detail for their age. They are centimetres in length, and El Albani thinks that they’re probably some of the oldest multi-cellular organisms so far discovered. If he’s right, they’re half a billion years older than the previous record-holders. Leading a team of 21 scientists, El Albani has painstakingly analysed the fossils. Their three-dimensional structure came with radial slits, scalloped margins and a complicated folded centre. To the team, these complex patterns tell us that the fossils were not simply rock formations. Instead, they were the remnants of once-living things that grew through coordinated signalling between different cells. The fossils are also rich in the mineral pyrite, which is the work of decomposing bacteria; again, this suggests that they were once living. Back when they were still alive, the Earth was a radically different place. Oxygen made up a small fraction of the atmosphere and a toxic mix of greenhouse gases choked the air instead. Still, things were on the up. The “Great Oxidation Event” was underway, kick-started about 300,000 years previously by tiny bacteria. These microbes pumped oxygen into the air around them as a waste product of photosynthesis, enriching the atmosphere with the gas that would change the planet’s fate. These rising oxygen levels could have been the trigger that allowed multicellular organisms to survive. Without the oxygen, they couldn’t have achieved a large size. Of course, it’s possible that the fossils could simply be complex colonies of bacteria, rather than true multicellular organisms. El Albani doesn’t rule out that possibility but again, the fossils’ complex three-dimensional shapes don’t quite fit with the idea of a simple bacterial mat. They also contain chemicals called steranes, which often give away the presence of complex eukaryotic cells. But Philip Donoghue from Bristol University, while impressed with the fossils, thinks that we can’t rule out the bacteria idea yet. The steranes, for example, could have moved into the fossils from surrounding rocks. And some scientists aren’t even convinced that the Gabon fossils were once alive. Bruce Runnegar, who studies the origins of multicellular life, says, “It is difficult to know if this is some unusually complex [non-living] structure, a feature made by a consortium of individual microbes, or evidence for primitive multicellular life.” Some of the fossils’ shapes – such as the wavy surfaces and radial slits – are sometimes seen when different kinds of fluids mix. “The wavy surfaces are unusual, but not unusual enough to convince me to put my money on these structures being "ancient representatives of multicellular life,” he says. Reference: Nature http://dx.doi.org/10.1038/nature09166

Read more about these fossils, including opinions from several other scientists, at Nature News

and an excellent explanation of why we can confidently say that the fossils at 2.1-billion years old at Highly Allochthonous 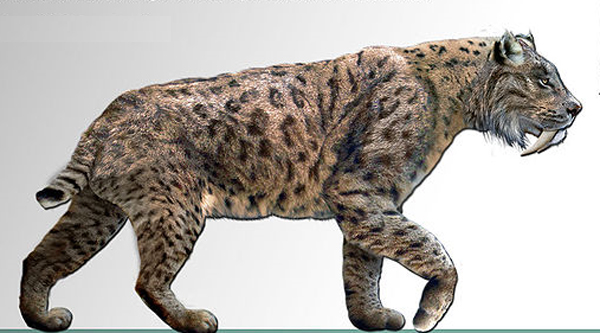 Sabre-tooth cats wrestled prey with powerful front legs From looking at the skeleton of a sabre-tooth cat, it would seem obvious what its main weapons are. But impressive though the huge canines are, they’re only part of its arsenal. Its stocky frame and sturdy front legs are equally important. Julie Meachen-Samuels and Blaire van Valkenburgh from the University of California, Los Angeles, have studied the skeleton of Smilodonfatalis, the most famous of the sabre-tooth cats (they’re not tigers). Using a digital X-ray machine at the Smithsonian Institution, the duo showed that its humerus (the bone between shoulder and elbow) was reinforced by extra-thick bone. Its outer shell, or cortex, was thickened to a greater degree than any other living cat. In terms of sturdiness, it even outclassed the equally extinct but considerably larger American lion. The extra reinforcement made Smilodon’s front legs very difficult to break, bend or compress. These sturdy limbs also had expanded attachment points for the cat’s relatively large muscles. The hind legs, while still thickened, was still within the range of normal variation for other cats. This new research fits nicely with the modern image of Smilodon as a subtle killer that hunted in a very different way than modern cats. It combined elements of a wrestler and an assassin, grapping large prey to the ground with its powerful front legs, and killing them quickly with a lethal stab of its famous teeth. Modern cats inflict death more slowly, with a suffocating bite to the throat. But there is no way that Smilodon could have done the same. Its skull and teeth are surprisingly weak, and might have broken during a protracted struggle. Instead, they were probably used to deliver an incisive and fatal bite to the blood vessels of the neck, after the prey had already been pinned. This specialisation allowed it to tackle very large prey, but it might also have been its downfall. As the largest mammals went extinct during the last ice age, Smilodon’s overpowering tactics would have done little good against smaller, more agile targets.

Reference: PLoS ONE to be confirmed; Image by Dantheman