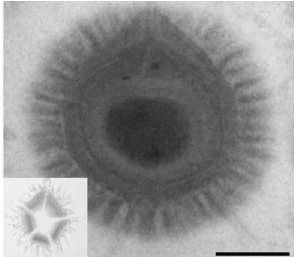 There are many weird viruses on this planet, but none weirder--in a fundamentally important way--than a group known as the giant viruses. For years, they were hiding in plain sight. They were so big--about a hundred times bigger than typical viruses--that scientists mistook them for bacteria. But a close look revealed that they infected amoebae and built new copies of themselves, as all viruses do. And yet, as I point out inA Planet of Viruses, giant viruses certainly straddle the boundary between viruses and cellular life. Flu viruses may only have ten genes, but giant viruses may have 1,000 or more. When giant viruses invade a host cell, they don't burst open like other viruses, so that their genes and proteins can disperse to do their different jobs. Instead, they assemble into a "virus factory" that sucks in building blocks and spits out large pieces of future giant viruses. Giant viruses even get infected with their own viruses. People often ask me if I think viruses are alive. If giant viruses aren't alive, they sure are close. Ever since giant viruses were first unveiled seven years ago, scientists have argued about the origins of these not-so-wee beasties. Many of their genes are different from those found in cellular life forms, or even other viruses. It's possible that giant viruses amassed their enormous genetic armamentarium over billions of years, picking up genes from long-extinct host or swapping them with other viruses we have yet to find. Other scientists have suggested that giant viruses started out giant--or even bigger than they are today. Some have even argued that they represent a new domain of life, although others aren't so sure. A new study suggests that giant viruses are indeed ancient. It is the work of a team of French researchers led by Jean-Michel Claverie, who went searching for new giant viruses in the waters near a marine biology station in Chile. They found a new kind so different from other giant viruses that they gave it a name of its own: Megavirus. It's astonishing to me that such a glorious name wasn't already taken. In the dinosaur world, people are always hunting for Latin ways to say, "I've got a really big dinosaur."

. The name Megavirus is truth in advertising. Its genome is 1.259 million base pairs long, which is 6.5 percent longer than the previous record holder among giant viruses. In that abundance of DNA are 1120 genes. That's hundreds more genes than found in a lot of bacteria. (You can browse its genome for yourself here.) Claverie and his colleagues compared the genes in Megavirus to the best-studied of the giant viruses, Mimivirus. They could not find matches for 258 Megavirus genes in Mimivirus. But they found counterparts to most of its genes, including genes for distinctively giant-virus features such as the viral factory. (The inset in the picture above shows the portal of a Megavirus viral factory, called a "stargate." It's similar to the stargate found in Mimivirus.) Mimiviruses have some genes for building and folding proteins, and so do Megavirus. These results lead Claverie and his colleagues to conclude that giant viruses started out giant. They might have even been some full-blown cellular life form. In the Mimivirus and Megavirus lineage, the genes mutated in different trajectories, and new copies of genes arose, producing different gene families. The lack of 258 Megavirus genes in Mimivirus might not mean that Megavirus picked up those genes from other sources. It's possible that Mimivirus lost those genes. Likewise, Megavirus may have lost hundreds of genes as well. Giant viruses might thus be relicts of the first chapters of the history of life. (You can read more about this scenario in this 2010 review by Claverie: pdf.) Fortunately, there's a straightforward way to test this hypothesis: find more giant viruses and see if they fit the pattern. Giant viruses seem to thrive in all sorts of habitats, so there should be no end of new species to find. And given that it didn't take long to trump the old genome-size record with Megavirus, you can expect scientists to find even bigger viruses somewhere on Earth. Whether they should call these new species Truckavirus, I leave to greater minds. Reference: "Distant Mimivirus relative with a larger genome highlights the fundamental features of Megaviridae" Defne Arslan, Matthieu Legendre, Virginie Seltzer, Chantal Abergel, and Jean-Michel Claverie. PNAS, in press. Link [should work by the end of this week]