Platonism is useful only when it's useful

Razib, are you implying there was no clearly defined ‘ontological leap’ from the animal to the human??? I’m going to have to clear this with the CDF in Rome. 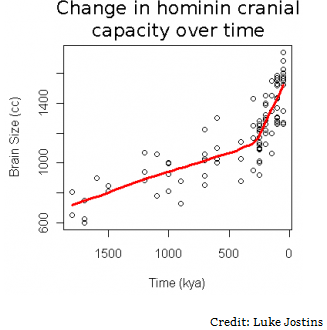 The figure to left illustrates the simultaneous encephalization of diverse hominin lineages over the past few million years. When I first saw this result it kind of blew me away. I had known that Neandertals had the largest cranial capacities of any hominins to walk the earth, but to see how many diverse groups exhibited a secular increase in volume over time is still something to behold. It also reminds us that our own conception of "us" vs. "them" in a deep and substantive manner may be somewhat illusory. This element of fiction doesn't negate the utility of the concepts. There are constructs and ideas which are highly valuable in generating inferences and scaffolding models, which nevertheless collapse under closer scrutiny. But we shouldn't forget that our concepts are only approximations on the real order of things. This is important when we consider ideas such as "species." Species is the taxonomic level which has a clear and distinct aspect because of the biological concept, but even it exhibits artificiality. Dichotomies such as "human vs. animal" are not even right in any sense, but they do express our normative framework, where human perspective is privileged. This doesn't mean that the human/animal distinction is without value, but it needs to be put in its proper context. It's a means to an end. And that's the major problem I have with "what makes us human" type of questions in the manner posed by Svante Pääbo below. It's a big and deep issue which we grapple with,

but it's not real in the way that the planet earth is real.

Human distinctiveness is an abstraction of great convenience for our species in organizing our intellectual furniture, but at the end of the day it's just a position in the parameter space of characters. Instead of putting the human/animal distinction into the instrumental category they are transformed into ontological ones. That makes sense for the Pope of the Roman Catholic Church, but it is I think less than a fruitful avenue for a scientist.