Plants use fungi to eat insects by proxy 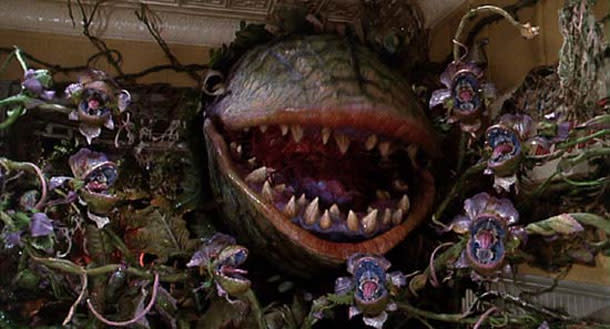 Flesh-eating plants are basically nitrogen thieves. The speed of their growth is limited by this invaluable element, just like all other plants. The difference is that plants that eat animals, like pitcher plants and the Venus fly trap, grow in places like swamps and rocky outcrops, where nitrogen in thin on the ground... or thin in the ground. They have to supplement their supply by stealing nitrogen from the bodies of animals. This is why some plants become killers. Let me clarify that: this is why some plants become obvious killers. Scott Behie from Brock University has found that a far greater range of plants can inconspicuously assassinate animals by proxy. They partner up with an infectious fungus that kills insects and transfers their precious nitrogen to the plant. Thanks to the fungi, the plants become indirect predators. The first such nitrogen-chain was discovered in 2001, when John Klironomos and Miranda Hart found that white pine trees can feast on soil-dwelling relatives of insects called springtails, via a fungus that grows on their roots. The fungus kills nearby springtails and delivers their nitrogen to the tree, in return for carbon. Behie wondered if the pine example was just the tip of the iceberg. He reasoned that if any fungus was going to mediate similar indirect kills, it was going to be Metarhizium. This well-known group—nine species strong—are commonplace throughout the world. They infect and kill more than 200 species of insects, and they often live within plant roots. They have all the right traits for shuttling nitrogen from insect to plant. Behie tested his idea by ‘feeding’ two plants – common beans and switchgrass – with waxmoth larvae. He infected the waxmoths with Metarhizium and placed them in soil next to the plants’ roots, but separated by a wire mesh. Earlier, Behie had fed the waxmoths with nitrogen-15, a slightly heavier version of the element, so that their bodies were infused with the stuff. After two weeks, nitrogen-15 made up 28 per cent of the nitrogen in the bean and 32 per cent of that in the switchgrass. All of that had previously been part of a waxmoth’s body. There’s only one possible way it could have got into the plant: the fungi absorbed the nitrogen-15 as they fed on the insects, travelled to the plants, associated with their roots, and transferred their nitrogen-15 across. (If the insects hadn’t been infected with Metarhizium before they were buried, the plants incorporated barely any nitrogen-15 into their tissues, proving that the fungus was responsible). In this way, the plants get all the benefits of carnivory without needing the specialised traps of a sundew or a Venus fly trap. Behie still hasn’t shown how common this phenomenon is, or how much it affects the movement of nitrogen through the world. But given Metarhizium’s widespread status, it’s reasonable to think that there’s plenty of surreptitious carnivory going on in the ground beneath our feet. Reference: Behie, Zelisko & Bidochka. 2012. Endophytic Insect-Parasitic Fungi Translocate Nitrogen Directly from Insects to Plants. Science http://dx.doi.org/10.1126/science.1222289Image by Maia Bidochka More on meat-eating plants