A simple white butterfly caterpillar (Pieris rapae) nibbles blissfully on a cabbage leaf, completely unaware of the complex interspecies interactions he has just set in motion. The cabbage, displeased with the damage the caterpillar is doing to its tissues, is releasing volatile compounds into the air, hoping to attract parasitoid wasps like Cotesia glomerata, which use caterpillars like the one eating through the cabbage's precious leaves as incubators for their larvae—and succeeds. Drawn by the compounds wafting off of the damage plant, a female wasp arrives and finds the defenseless caterpillar. Using a needle-like appendage, she injects her eggs into the caterpillar's body, and her larvae hatch and feed on the caterpillar's internal organs one by one, carefully selecting the least important so that their meal survives as long as possible. Finally, when they are ready to pupate, the wasp larvae tunnel out, and through a chemical trick, convince their half-dead host to spin them a protective web of silk. Success, thinks the plant (if plants could think); its cry for help has stopped another hungry caterpillar in its tracks. 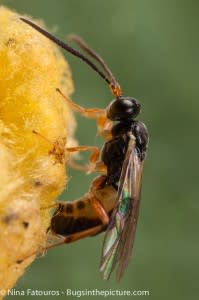 But, as Dutch scientists have discovered, the story doesn't end there. What goes around comes around for the C. glomerata, as there are other wasps that use them as hosts, laying eggs in the wasp larvae that grew in the caterpillar, like a parasitic Russian doll. Researchers have discovered that these hyperparasitoids (parasitoids of parasitoids) can smell the call being broadcast by the plant, too. After all, the world is a large place. Parasites that need to find a very specific, small host benefit from having a way of finding what they need without wasting tons of energy searching. So it makes sense that Cotesia glomerata and other parasitoid wasps with caterpillar hosts are drawn to the chemical compounds emitted by damaged plants. If they're drawn, the wasps that parasitize them should be drawn, too. So the team tested this hypothesis by collecting air from undamaged plants, plants damaged by uninfected caterpillars, and plants damaged by caterpillars already infected with parasitiod wasp larvae, then presented those scents to hyperparasitoid wasps to see if they were attracted to them. Not only were the wasps attracted to the smell of caterpillar damage in general, "we found that they preferentially detected odours of plants damaged by infected caterpillars," explained Dr Erik Poelman, lead author of the study published today in PLoS Biology. The wasps were nearly five times more attracted to the damage done by infected caterpillars. "We were excited by these results as they indicate that hyperparasitoids rely on a network of interactions among plant, herbivore and parasitoids to locate their host". But how did the wasps detected whether the caterpillars were infected? Poelman and his team wanted to find out. It's known that infection can change the saliva contents of caterpillars, so they took the saliva from uninfected and infected caterpillars and presented those scents to the wasps, but the wasps didn't care. So while the infection is altering the caterpillar's saliva, the change in attractive chemicals had to be coming from the plant. They then tested the different air collections for volatile compounds, and found the ones damaged by caterpillars infected with Cotesia glomerata were only 40% similar to the ones damaged by uninfected caterpillars. Something about infection changes the saliva in a caterpillar, which in turn affects what volatile compounds a plant emits when it gets damaged by that saliva. This complex web of interactions calls in to question the role of the plant compounds in the first place. Though they are often thought of as a 'cry for help,' the team noted that this may not be the case at all. "Although plant volatiles may function as a ‘‘cue’’ to parasitoids, they may not be a specific ‘‘signal’’ released by the plant (implying a selective benefit)," write the authors. "It is important to emphasize that volatile cues may provide many community members with information and thereby may not necessarily result in a fitness benefit to plants." These findings also call into question the use of parasitoid wasps as biocontrol for managing pests. Cotesia glomarata has been introduced and intentionally released in a number of agricultural areas to control caterpillars like Pieris rapae. Recently, some have suggested

that farmers might be able to spray the volatile compounds emitted by damaged plants to attract more parasitoids, as a way of reducing pest populations without using pesticides. But the authors think that this strategy might not be so clear-cut. "Our results show that hyperparasitoids may parasitize up to 55% of the parasitoid offspring, therefore potentially playing a major role in parasitoid population dynamics," they caution. "Overexpression of herbivore-induced plant volatiles [HIPVs] in crops or field application of synthetic parasitoid attractants may not benefit pest control in conditions where the responses of hyperparasitoids to HIPVs cause major mortality to parasitoids." In other words, the interactions between species are far more complex than we once thought, and we can't assume we can predict how our manipulations will affect a community—which is generally the trouble we've gotten into when trying to use biocontrol mechanisms. The more we try to tinker with interspecies interactions, the more unintended consequences we seem to have. Research: