Planting Milkweed Across Major Cities Could Help Save Monarchs

Planting some 1.8 billion stems of milkweed could save monarchs, and that might actually be doable. 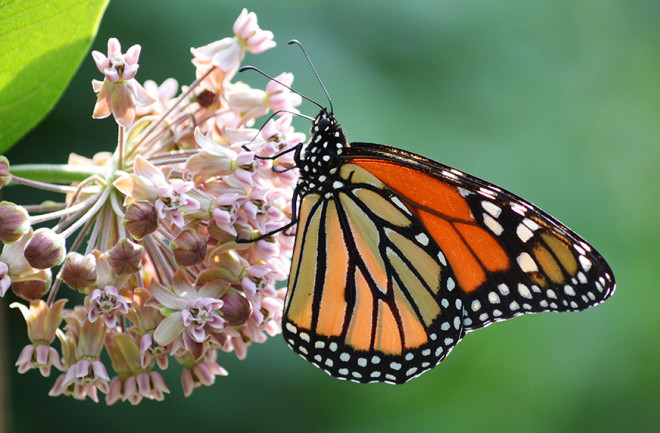 A Monarch butterfly on the flowers of a milkweed plant. (Credit: Mark Rogovin/The Field Museum)

In the past two decades, the monarch butterfly population east of the Rocky Mountains has declined by 87 percent. That’s due in part to the fact that the only plant that monarchs lay their eggs on – milkweed – has become scarcer thanks to farmers removing it from their fields. Scientists say that stopping the monarch’s decline will require planting some 1.8 billion stems of milkweed. And, according to new research, much of that milkweed can be planted in U.S. cities.

That’s the finding of a team at the Field Museum in Chicago, who published their findings in the journal Frontiers in Ecology and Evolution on Thursday. They say that cities could make up for almost one-third of all of the necessary milkweed plants. That’s 600 million stems.

“We don’t know how far off their estimates might be,” cautions Wayne Thogmartin, a research ecologist for the U.S. Geological Survey not involved with the study. But, he adds, this is “the best study of milkweed density in urban settings and perhaps any setting.”

Milkweed is named for the milky fluid that leaks from the plant’s leaves when they break. But monarchs have adapted to digest milkweed’s toxins and use them to avoid predators. As a beneficial native plant, it attracts not only butterflies but other pollinators.

However, milkweed has gotten a bad rap from farmers and gardeners alike because it can spread rapidly. If farmers keep removing milkweed in agricultural areas, where else could all of the essential milkweed go? Some researchers thought cities were the answer, but they didn’t know how much space was available for milkweed.

A multidisciplinary team of geospatial analysts — experts who look at map data — as well as social scientists and ecologists, worked together to solve this rather difficult math problem. To develop their estimate, the team used technology for detecting available green space in four cities, then talked with concerned residents, and finally trekked through those cities to actually count milkweed stems.

LiDAR, short for Light Detection and Ranging, let researchers “flip the script” that cities are “only concrete and pavement,” according to Abigail Derby Lewis, a conservation ecologist with the Field Museum and lead author on one of the study’s papers. The laser-scanning technology revealed green space at a new level of detail in Chicago, Austin, Kansas City and St.Paul-Minneapolis, which all sit along one of the major monarch migration paths, the so called “milkweed highway.” The researchers say that each patch of green could be an opportunity to plant milkweed.

Mark Johnston, geographic information manager for the Field Museum and lead author of the study, now hopes to look at smaller cities that are still within monarch butterflies’ habitat. These other cities likely have lots more agricultural space and different challenges for planting milkweed than big cities.

Beyond simply knowing where milkweed could be planted, the researchers wanted to find out how likely it was that people would actually plant milkweed in those places. To answer this question, a team led by Lex Winter, an environmental social scientist at the Field Museum’s Keller Science Action Center, surveyed 734 people and conducted 76 interviews with conservation-minded people who live in the four urban areas.

As a result, the researchers calculated overall city milkweed capacity based on the likelihood that 2 percent of landowners would plant more milkweed. But the research team is optimistic that number could be higher with more awareness and normalization of milkweed.

If one neighbor plants milkweed in their front yard, it is more likely that another neighbor will do the same, said Johnston. Derby Lewis hopes native plant landscaping that includes milkweed will become the gold standard instead of manicured, turf-like lawns.

Some families may lose interest because milkweed can take a while to grow, says Mike Rizo, a program specialist for the U.S. Forest Service who helps run outreach programs about monarchs and other pollinators. But he plans to use the research findings to “validate what families are doing at a household level.”

Besides homes, much of cities’ milkweed can be planted in green space along major and minor roadways.

The U.S. Fish and Wildlife Service is set to decide whether monarch butterflies are an endangered species in December 2020. So exactly how much milkweed is planted in cities by then will factor into the equation.

Editor’s Note: An earlier version of this story incorrectly stated the number of surveys that the team conducted. The researchers carried out 734 surveys.