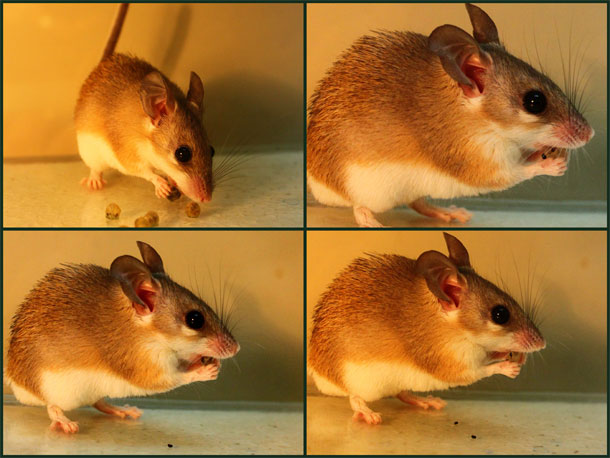 A desert mouse has found a seed. It bites into it, and gets a pungent mouthful of mustard. Reeling from the chemical party in its mouth, its spits out the seed and unwittingly helps the seed’s producer – a Israeli desert plant called Ochradenus baccatus. By using chemical weapons, it converts rodents into an unwitting vehicles for its seeds. Ochradenus produces yellow flowers and sweet, succulent, white berries. When a mouse bites into the berries, an enzyme in the seeds called myrosinase mixes with chemicals in the pulp called glucosinolates. Housed in their separate compartments, these substances are harmless. But when they are released by gnawing teeth, and mix together, the enzyme converts glucosinolates into a wide range of toxins. These include isothiocyanates, the substances that give mustard and wasabi their pungent kick. As the mouse breaks the berries, an explosion of mustard goes off in its mouth. [embed width="610"]http://www.youtube.com/watch?v=wgKFIYffReY[/embed] Michal Samuni-Blank from the Technion–Israel Institute of Technology in Israel filmed the spitting mice using motion-activated cameras in the Israeli desert. The mice would carry away clusters of fruit to eat them in sheltered rocky crevices. Once they got a mouthful, they spit out more than two-thirds of the pungent seeds. If Samuni-Blank treated the seeds to deactivate their stash of myrosinase, the mice ate more than 80 per cent of them. By carrying and hocking out the uneaten seeds, the rodents are doing the plant a favour. Its seeds can grow far away from the parent plant, and the mice effectively ‘plant’ them in shaded, humid conditions. When Samuni-Blank collected seeds that the mice had spat out, every single one of them could germinate in the lab. In fact, seeds that spend some time in the mouth of a mouse are more than twice as likely to germinate as those that stay within intact fruit. Many plants use mustard oil bombs to protect themselves from hungry animals, and some plant-eaters have evolved ways around this defence. The green peach aphid, for example, eats tissues that contain glucosinolates while avoiding cells that contain the myrosinase enzyme. Others simply use the rodents’ tactics, by spitting out the chemical mess. Plant chemical weapons are often adapted so they harm seed eaters, such as rodents, but not seed dispersers, such as birds. Ochradenus’s defence is unusual in that it makes no such distinction. Instead, it transforms seed eaters into seed dispersers, building a symbiosis out of disgust. Reference: Samuni-Blank, Izhaki, Dearing, Gerchman, Trabelcy, Lotan, Karasov & Arad. 2012. Intraspecific Directed Deterrence by the Mustard Oil Bomb in a Desert Plant. Current Biology http://dx.doi.org/10.1016/j.cub.2012.04.051Image by Samuni-Blank