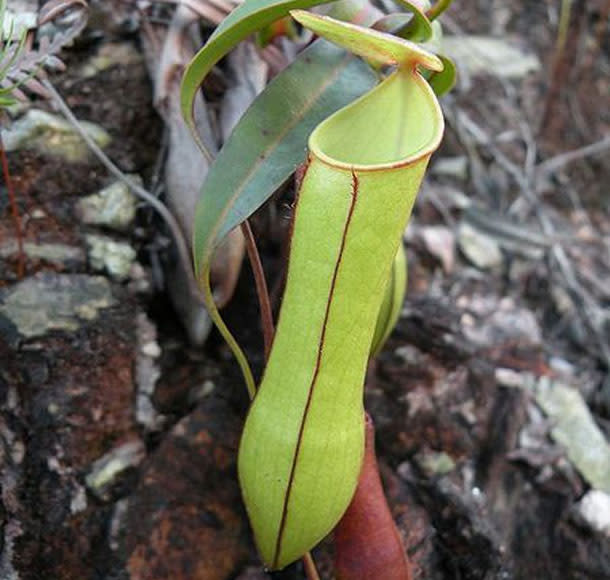 It’s a rainy day in the jungles of Borneo, and an ant has taken shelter from the falling drops by clinging to the underside of a leaf. It has chosen poorly. Its shelter is the ‘lid’ of a pitcher plant, and it hangs over a living vase full of digestive fluids. As rain pummels the jungle, a drop lands on the lid and flicks off the ant underneath. The insect falls into the pool of fluid and is consumed by the plant. Pitcher plants are famous for their flesh-eating ways, and they rely on slippery surfaces to trap their prey. Its pitcher-shaped traps are made from rolled up leaves, and secrete nectar from their rims to entice their prey. During wet conditions, the rims are coated with a thin layer of water, making them extremely slippery. They have another trick too – tapering wax crystals on the inner walls of the pitcher. These greatly reduce the surface area that insect feet would cling to, and ensure that individuals that fall inside can’t climb back out. Ulrike Bauer from the University of Cambridge noticed that one species – the slender pitcher plant (Nepenthes gracilis) – also has wax crystals on the underside of its lid. Their function became clear after Bauer’s team saw a ladybird in northern Borneo, which was sheltering under the lid, being flicked off by a rain drop. She collected slender pitchers and tested them in her lab, simulating a shower of rain with a dripping water bottle. High-speed video cameras revealed that, although ants can normally cling to the lid, falling drops can knock off 40 per cent of them. And when Bauer coated the lids with an “anti-slip” silicon polymer, only 25 per cent of the ants were flicked off. Under the microscope, the crystals on the pitcher’s inner wall look like a labyrinth of thin, upright flakes (A and B). But those under the lid looks like a field of columns, scattered unevenly across the surface (C and D). These gaps are large enough for insect claws to slip through, which probably explains why ants can normally grip the lid. 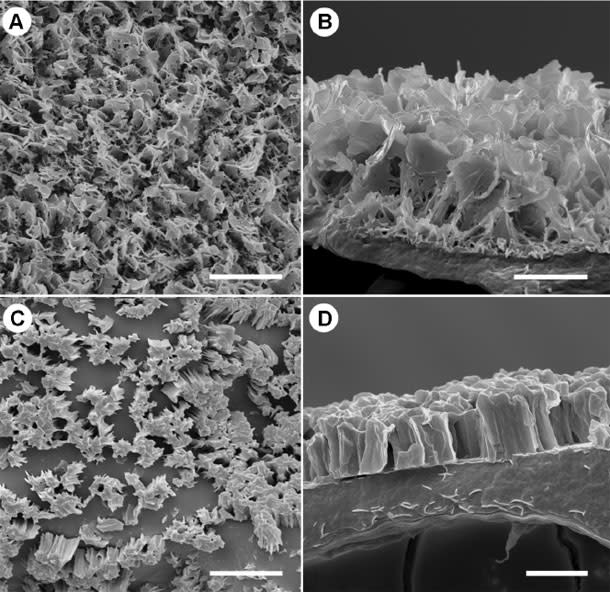 If the lid was as slippery as the walls, ants might fall off immediately and land outside the pitcher. By providing a normal foothold, the lid ensures that insects are well positioned over the fluid below, before the impact of falling rain dislodges them. This might explain why the slender pitchers contain more insect corpses after rainy days. Until now, most people thought that the lid only acts to attract prey by secreting nectar, or to protect the pitcher from overflowing or being diluted. Now, we know that for at least one species of pitcher plant, the lid is an important part of the trap itself. Reference: Bauer, Di Giusto, Skepper, Grafe & Federle. 2012. With a Flick of the Lid: A Novel Trapping Mechanism in Nepenthes gracilis Pitcher Plants. PLoS ONE http://dx.doi.org/10.1371/journal.pone.0038951Image by Robert Tan Hung Huat More on pitcher plants