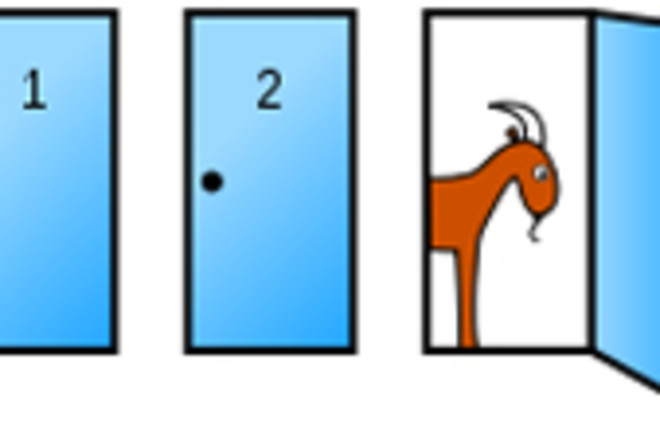 Imagine that you’re in a game show and your host shows you three doors. Behind one of them is a shiny car and behind the others are far less lustrous goats. You pick one of the doors and get whatever lies within. After making your choice, your host opens one of the other two doors, which inevitably reveals a goat. He then asks you if you want to stick with your original pick, or swap to the other remaining door. What do you do? Most people think that it doesn’t make a difference and they tend to stick with their first pick. With two doors left, you should have even odds of selecting the one with the car. If you agree with this reasoning, then you have just fallen foul of one of the most infamous of mathematical problems – the Monty Hall Dilemma. In reality, you should actually swap every time – doing so means double the odds of getting the car. I will explain why shortly but if you’re currently confused, you are not alone. Over the years, the problem has ensnared countless people, including professional mathematicians. But not, it seems, pigeons. Walter Hebranson and Julia Schroder showed that, after some training, the humble pigeon can learn the best tactic for the Monty Hall Problem, switching from their initial choice almost every time. Amazingly, humans who get similar extensive practice never develop the optimal strategies that the pigeons pick up. This doesn’t mean that pigeons are “smarter than humans” as some news stories have claimed, but it does mean that the two species approach probability problems in different ways. We suffer because we overthink the problem. The Monty Hall Dilemma takes its name from Monty Hall, the presenter of a show called Let’s Make a Deal, which involved similar choices. The dilemma became truly legendary when it featured in a column called Ask Marilyn in Parade magazine. When columnist Marilyn vos Savant, the then holder of the Guinness World Record for highest IQ, wrote the correct solution, she was inundated with complaints. Around 10,000 readers disagreed with her, and wrote in to say as much (these were the days when trolls had to actually pay for postage; read the last letter in particular). Many of them had PhDs and many were mathematicians. Even Paul Erdos, the most prolific mathematician in history, refused to believe this explanation until computer simulations proved beyond all doubt that always switching was the best strategy. The problem is that most people assume that with two doors left, the odds of a car lying behind each one are 50/50. But that’s not the case – the actions of the host beforehand have shifted the odds, and engineered it so that the chosen door is half as likely to hide the car. At the very start, the contestant has a one in three chance of picking the right door. If that’s the case, they should stick. They also have a two in three chance of picking a goat door. In these situations, the host, not wanting to reveal the car, will always pick the other goat door. The final door hides the car, so the contestant should swap. This means that there are two trials when the contestant should swap for every one trial when they should stick. The best strategy is to always swap – that way they have a two in three chance of driving off, happy and goatless. All over the world, people are spectacularly bad at this. We almost always stick or, at best, show indifference. Hebranson and Schroder wanted to see if other species would be similarly vexed. They worked with six Silver King pigeons and altered the game show format to suit their beaks. Each pigeon was faced with three lit keys, one of which could be pecked for food. At the first peck, all three keys switched off and after a second, two came back on including the bird’s first choice. The computer, playing the part of Monty Hall, had selected one of the unpecked keys to deactivate. If the pigeon pecked the right key of the remaining two, it earned some grain. On the first day of testing, the pigeons switched on just a third of the trials. But after a month, all six birds switched almost every time, earning virtually the maximum grainy reward.

Every tasty reward would reinforce the pigeon’s behaviour, so if it got a meal twice as often when it switched, you’d expect it to soon learn to switch. Hebranson and Schroder demonstrated this with a cunning variant of the Monty Hall Dilemma, where the best strategy would be to stick every time. With these altered probabilities, the pigeons eventually learned the topsy-turvy tactic. It may seem obvious that one should choose the strategy that would yield the most frequent rewards and even the dimmest pigeon should pick up the right tactic after a month of training. But try telling that to students. Hebranson and Schroder presented 13 students with a similar set-up to the pigeons. There were limited instructions and no framing storyline – just three lit keys and a goal to earn as many points as possible. They had to work out what was going on through trial and error and they had 200 goes at guessing the right key over the course of a month. At first, they were equally likely to switch or stay. By the final trial, they were still only switching on two thirds of the trials. They had edged towards the right strategy but they were a long way from the ideal approach of the pigeons. And by the end of the study, they were showing no signs of further improvement.

Why is the Monty Hall Dilemma so perplexing to humans, when mere pigeons seem to cope with it? Hebranson and Schroder think this is a case of our own vaunted intelligence working against us. When faced with a problem like this, we try to think it through, working out the best solution before we do anything. This would be fine, except we’re really quite bad at problems involving conditional probability (such as “if this happens, what are the odds of that happening?”). Despite our best attempts at reasoning, most of us arrive at the wrong answer. Pigeons, on the other hand, rely on experience to work out probabilities. They have a go, and they choose the strategy that seems to be paying off best. They also seem immune to a quirk of ours called “probability matching”. If the odds of winning by switching are two in three, we’ll switch on two out of three occasions, even though that’s a worse strategy than always switching. This is, of course, exactly what the students in Hebranson and Schroder’s experiments did. The pigeons, on the other hand, always switched – no probability matching for them. In short, pigeons succeed because they don’t over-think the problem. It’s telling that among humans, it’s the youngest students who do best at this puzzle. Eighth graders are actually more likely to work out the benefits of switching than older and supposedly wiser university students. Education, it seems, actually worsens our performance at the Monty Hall Dilemma. Reference: