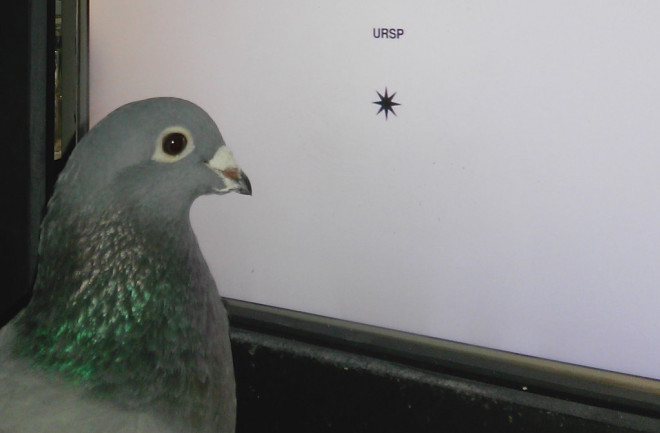 A pigeon scrutinizes a word (gibberish) during training. (Credit: William van der Vliet) Birds are rapidly building their reputation as a brainy bunch, and the latest credit goes to four pigeons who can visually recognize written words. These pigeons were living in a lab in New Zealand where, over a span of two years, they learned to distinguish four-letter English words from nonsense words. For their training, a computer screen would flash words like “DOWN” or “GAME”, and non-words like “TWOR” or “NELD”, along with a star symbol. Each time the pigeons made a correct identification — pecking the word if it was a real one, or pecking the star symbol beneath a non-word — they were rewarded with a portion of wheat.

After the pigeons built up decent vocabularies (the star pupil acquired 58 words), the screen began flashing new words that they had never seen before. And even when faced with these novel words, the pigeons continued to pick out the real words from the non-words with impressive accuracy, according to a study published in Proceedings of the National Academy of Sciences. So how did they do it? How does a pigeon distinguish words from gibberish, based solely on how the strings of letters look on a screen? “It appears that the pigeons are paying attention to pairs of letters in the words,” explains study lead author Damian Scarf, a lecturer in psychology at the University of Otago, New Zealand. Letters that appear side-by-side are known as bigrams, and some bigrams occur more frequently than others. For example, “TH” is a high-frequency bigram, whereas the “CB” combination is far less common. Over time, the pigeons came to pick up on these statistical properties of words. “We looked at whether the pigeons’ performances were related to how frequent the letter pairs were in their vocab,” says Scarf. “Basically we found what you find with people, which is that the more common the letter pairs, the better they do at recognizing the word.”

Now, before we raise our hopes of seeing a pigeon sitting on a park bench, poring over a newspaper, it’s important to note that these trainees could not read. Reading requires not only the ability to visually recognize words, but also to decode the letter-sound relationships. The pigeons were missing that second half of the equation. But what these birds did manage to learn is remarkable, and it might even explain why humans have an entire brain region devoted to recognizing written words, despite the fact that writing was only invented around 5,400 years ago. As Scarf and his colleagues note, that’s far too short a period for a new specialized brain area to have evolved from scratch, but more than enough time for an old neural mechanism to get repurposed.

This process of “neuronal recycling” involves brain cells that were once devoted to spotting everyday objects, like rocks or trees, gradually learning to key in to new visuals, like the written word. Some scientists believe this is precisely how ancient people first developed reading skills, and a recent study revealed that monkey brains can be trained to visually process written words in much the same way. But according to this latest study, visual word recognition is not limited to the realm of the primate brain. Indeed, bird brains, which are “neither genetically nor organizationally similar to [those of] humans,” are quite capable of taking an existing neural circuit and recycling it to process a visual word — or, as Scarf describes it, a “two-dimensional stimulus that’s not relevant in the real world.” Though the capacity to recognize a series of printed strokes may be of little consequence to a pigeon, the research shows that a visual system separated from ours by more than 300 million years of evolution can be co-opted to perform a very human function. So whether or not they care, for four pigeons in New Zealand, words are now jumping off the page.