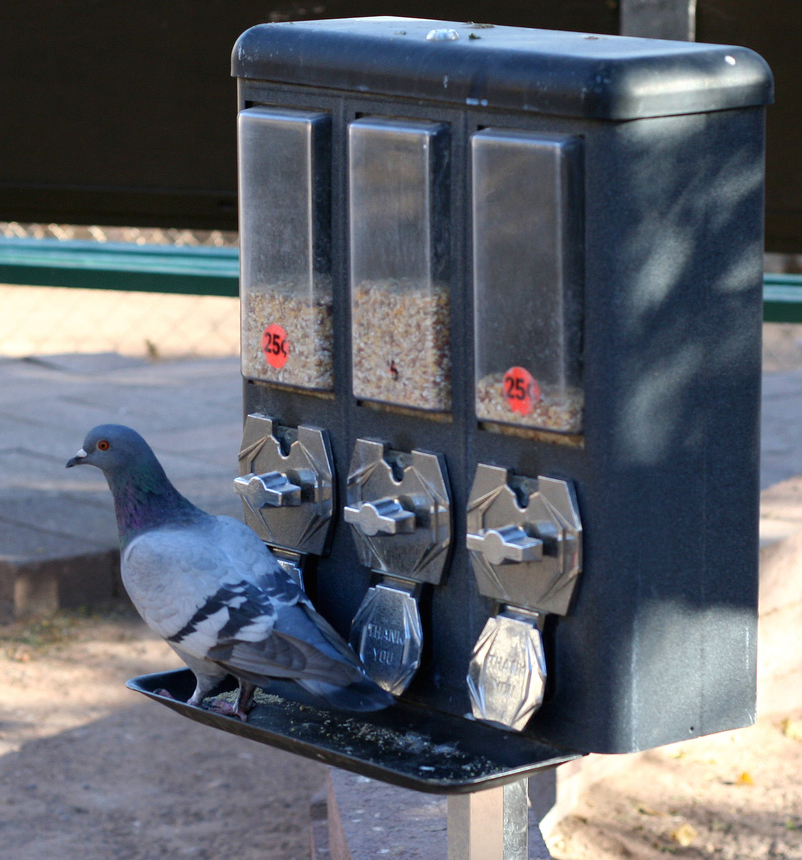 If you watch poker coverage on television, you probably won't hear the commentators compare players to pigeons. Maybe they should. The birds don't play a great game of hold 'em, but the way they think about risk might be strikingly similar to the way we do. Researchers discovered this by putting humans and birds through a basic study of risky behavior. "In earlier work, we had tried to recreate some classic behavioral economics results with pigeons, but had failed to do so," says Elliot Ludvig, a psychologist at the University of Warwick. (You might reasonably ask why he's studying behavioral economics in pigeons. Don't worry, we'll get there.) Humans are famously "risk averse" for gains. This means that if someone offers us a smaller, guaranteed amount of money (or some other reward), we prefer that to an uncertain but larger amount. For example, given a choice between $50 and a coin flip for $100 or nothing, people usually pocket the $50. But we're "risk seeking" for losses. If the coin flip is between losing $100 and losing nothing, we'll choose to gamble rather than just handing over $50. The same thing is true when people choose between a larger gain and a smaller one, rather than a gain and a loss, Ludvig says. This kind of decision making might seem like a stretch for a bird. But even a lowly pigeon has to make choices all the time about where to search for food. The retiree on the park bench with the bag of stale crumbs is a sure bet; following around a child with a tippy ice cream cone is more of a high-stakes gamble. Yet Ludvig had struggled to recreate human decision-making results in pigeons. The problem, he realized, was that pigeons don't have the luxury of language. Researchers can explain a gambling scenario to human subjects ("The odds are one-in-three that there's a new car behind Door Number One!"), but pigeons have to deduce the odds on their own, through trial and error. Rather than teaching pigeons English, Ludvig decided to level the playing field by making humans take a pigeon's version of the test. Researchers gathered a group of human subjects and a small group of pigeons. The pigeons did daily testing sessions for about a week. In each trial, a pigeon walked into a testing arena that held a pair of colored doors. After it chose a door to go through, food was dispensed. It was up to the pigeons to learn the pattern: two possible door colors were high-value (orange meant a safe 3 cups of food, and purple was either 4 or 2 cups) and two were low-value (yellow for a safe 1 cup of food, green for a gamble between 2 and 0). Humans did their trials all at once on a computer screen, with images of colored doors—but like the pigeons, they had to deduce the rules. The reward wasn't food pellets but a number of points that flashed on the screen after each choice. Researchers told subjects to try to get as many points as possible. Classic psychology says people should gamble less often when there's more at stake. What happened, though, was the opposite. By the end of the experiment, when people had figured out the stakes associated with each door, they picked the risky option about 35 percent more often for the high-value door than the low-value one. In other words, they were more likely to gamble for a higher number of points, and to take the safe option for the lower number. Pigeons made nearly identical choices to humans.

By the final days of the experiment, the birds were choosing to gamble more often on high-value doors than low-value ones. The difference was even the same as in humans: about 35 percent. Why didn't people behave as expected? Ludvig thinks the difference is that in older studies, subjects had the options spelled out for them. In his study, people had to figure out the odds through their own experience. (Another difference is that the people in this study played for points, not for real monetary rewards or even for food, like the pigeons did.) When they don't learn the rules ahead of time, "people behave similarly to pigeons," Ludvig says. He thinks the results are relevant to real gambling games like slot machines—or even to the choices we make on a daily basis, like whether to risk getting a ticket by parking illegally while we dash into a store. Ludvig says the close similarity between human and pigeon results surprised him. It may point to something deep and ancestral in the brain that influences our decision making. "We think that a lot of human choice is driven by basic biases about how people perceive and remember risks and rewards, which we share with many other species," he says. By studying these biases, Ludvig hopes to learn more about how we make risky choices. Are certain habits—like leaning toward a gamble when the stakes are higher, or lower—exaggerated in people who are problem gamblers or who behave in other risky ways? When humans won't reveal why they do what they do, a few hungry birds might help.