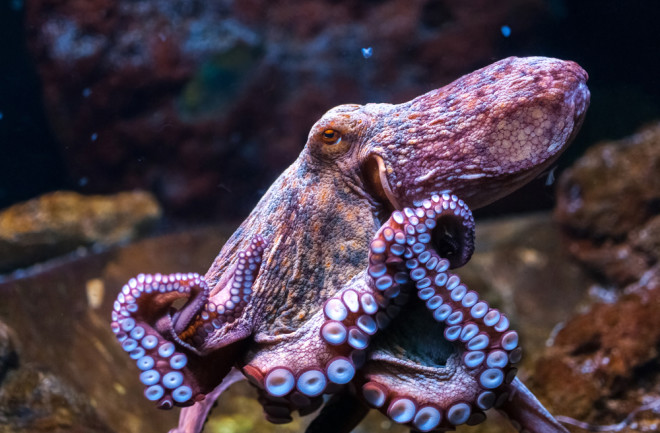 (Credit: Olga Visavi/Shutterstock) Some cephalopod researchers have another job title: Octopus anesthesiologist. It sounds far-fetched, but it's an important task. Octopuses, and cephalopods in general, are the smartest invertebrates, and their complex, unique central nervous systems are studied by researchers interested in everything from motor control to visual processing to cognition itself. But that kind of research often involves invasive techniques that could cause the creatures significant pain.

Can You Feel It?

As researchers began to grasp just how developed the brains of cephalopods were, they began to worry that they could actually feel something like what we would call pain. While most animals will flinch away from potentially harmful stimuli, experiencing what researchers call a "noxious stimuli," and what we simply call "ouch!", is another thing. Most invertebrates aren't thought actually feel pain, but cephalopods stand apart. Octopuses have as many neurons as a dog and are intelligent enough to open jars and escape from tanks. Their brains don't look like ours, but they're complex and powerful. In all, it was enough to convince researchers that cephalopods were deserving of extra care during research. Canada, Australia, the United Kingdom and the European Union all require researchers to get ethical approval for experiments with cephalopods, which includes the use of anesthesia during procedures that could be painful. The EU even gave them the same protections as vertebrates — the only invertebrates it's done so for. To knock cephalopods out, most researchers use either magnesium chloride or ethanol. But here's where researchers from San Francisco State University noticed something troubling: Up until now, scientists assumed that because both substances render the cephalopods immobile, they must be unconscious. But, no one had ever checked to see that they were actually out cold. The supposed anesthetic could just be acting as an immobilizing agent. It's the equivalent of being operated on while still conscious, but unable to move—pain and all.

So, the researchers set out to test specifically what was happening to cuttlefish and octopuses under the influence of these chemicals. They attached electrodes to the pallial nerve, which runs just beneath the skin and is easy to access. Then, they exposed cephalopod subjects to one of the two substances and, once they had stopped moving, gave them a series of pinches. Changes in how active the nerve was would let researchers know that the anesthetic was doing its job. They published their findings in February in Frontiers in Physiology. Luckily, it turned out that all of the cephalopods were truly knocked out following a dose of either magnesium chloride or ethanol. In both cuttlefish and octopus, the neural signals indicated that pain sensations weren't reaching the brain, and the cephalopods were unaware of the stimuli. It's cause for researchers to breathe a sigh of relief — they were treating the invertebrates ethically after all. One thing the researchers did notice that they hadn't seen before was a delay of about 15 minutes between the cephalopods becoming immobile and becoming unconscious when using magnesium chloride, something the researchers say they will incorporate into future studies. Ethanol, too, appeared to have its own downside — the animals displayed a behavior associated with discomfort or irritation. They also tested magnesium chloride and lidocaine as topical anesthetics, which could be administered along with the general anesthesia to help treat any lingering pain associated with surgical procedures. In all, the researchers say they're confident that experiments on cephalopods haven't been causing them unnecessary harm. And for octopus anesthesiologists everywhere it's good news — they get to keep their jobs.