People Are More Swayed by Things That Look Sciencey 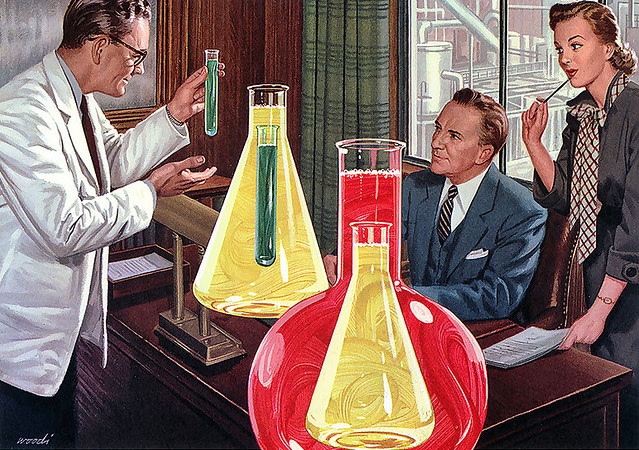 UPDATE, 3/2/18: Other researchers who attempted to replicate this study failed to find the same results. Many papers by Brian Wansink, the second author on this study and head of Cornell's Food and Brand Lab, have been retracted or corrected for issues with data. Read more here.

Anyone who's paged through a women's magazine will recognize this strategy: to make a product seem better, surround it with a scientific glow. "Clinical trials show lashes grow up to 400% fuller!" "27% reduction of dark spots in 10 weeks!" "Ceramides!" Does this actually help convince people to hand over their cash? A study using promotions for fake drugs suggests that might be the case. "Graphs equal truthiness," says Aner Tal, a researcher at Cornell University's Food and Brand Lab. "That's actually where this research was born." When giving academic presentations, he says, he's always been encouraged to use more graphs, numbers, and figures to make his arguments convincing. If other academics are swayed by these scientific-looking additions, what about consumers? Along with lab director Brian Wansink, Tal wrote up a description of an imaginary new drug. Then they recruited 61 people to read about it. "A large pharmaceutical company has recently developed a new drug to boost people's immune function," the subjects read. In trials, people who took this pretend drug had only a 47% chance of coming down with the common cold, compared to 87% if they didn't take the drug. For half of Tal's subjects, this was all the information they got. The other half of people saw the "trial" results reinforced with a bare-bones bar graph: Afterward, subjects filled out a questionnaire: On a 9-point scale, "How effective is the medication?" And, yes or no: "Does this medication really reduce illness?" Even though subjects who saw a bar graph got the exact same numbers and other information as the graph-less subjects, they rated the drug's effectiveness a little higher. The more dramatic result came from the yes/no question. About 68% of text-only subjects said that yes, they thought the medication reduced illness. Among subjects who saw the bar graph, 97%—all but one person—said yes. It was possible, though, that subjects who saw a graph were more convinced simply because the information was repeated. So the researchers did the experiment again. This time, subjects who didn't see a bar graph saw the numbers repeated in the text instead. Once again, subjects who saw bar graphs were more enthusiastic about the imaginary drug

, rating its effectiveness significantly higher. It wasn't because they'd retained the information better. When quizzed, both groups could remember the numbers from the trial results equally well. But when researchers asked subjects to rate their agreement with the statement "I believe in science" on a scale of 1 to 9, they did find something: people who said they believed more strongly in science were more swayed by the bar graph. The researchers still wondered whether the effect might come from the presence of a picture—any kind of picture—and not the scientific impression that picture gave. So they tried a third experiment. This time, subjects read about a fictional anti-inflammatory drug. In the description, half of them read: "The drug’s chemical is C21H29FO5, meaning it’s carbon-oxygen-Helium-and-fluorine based.” The other half saw the exact same description, minus the chemical formula "C21H29FO5." Afterward, researchers asked the subjects how many hours they thought the drug's effects would last. The results this time were surprising, Tal says. People who only saw the names of molecules, but no formula, estimated the drug would work for a little under 4 hours on average. But people who saw a chemical formula estimated that it would work for almost 6 hours. "A more than 50% increase!" Tal says. With a chemical formula, people may have been especially persuaded because they didn't really understand what it meant. In earlier studies, technical jargon increased people's belief in a scientific claim. So did brain images. When people don't understand what they're seeing and reading, they may assume the source of the information is an expert, and therefore trustworthy. But the bar graphs that Tal showed his subjects couldn't have been simpler. He thinks they worked because people see a "halo of scientific validity" when they read materials that include scientific-looking elements like charts or formulas. The effect may be especially strong when those people consider themselves believers in science. The obvious moral for consumers is to watch out for advertising that tries to persuade with an aura of science. But there's a message for science writers and communicators too, Tal says, "which is to be careful about what they present." When scientific studies are conveyed to a general audience, they're often presented as "absolute conclusive truth," he says, even though reality is more complicated. "As the people who channel information from the researchers to the public, science communicators have an important role to play." Or if you only care about convincing people, Tal says, "Use more graphs!"