Peer Into the Rainforest's Stunning Biodiversity 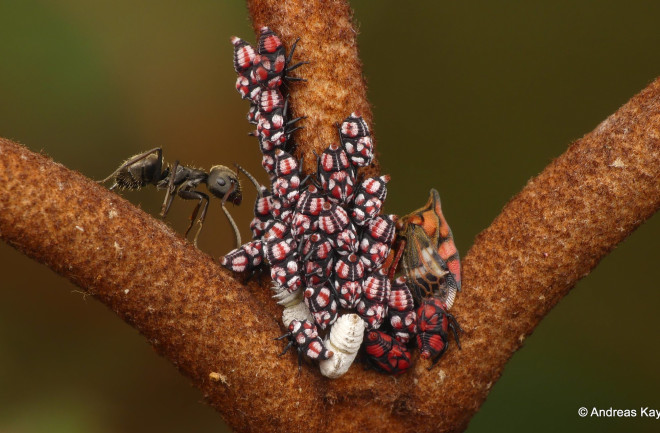 Treehoppers, Tritropidia galeata, as photographed by Andreas Kay. He shared the image to his Facebook account shortly before his death. (Credit: Andreas Kay)

In mid-October, the world lost a great light: Andreas Kay, a wildlife photographer who celebrated the explosive biodiversity of insects, spiders, amphibians and other creatures in Ecuador’s teeming rainforest. Born in Köln, Germany, Kay was 56 and died from brain cancer.

Kay shared more than 30,000 photos on Flickr, all of them now in the public domain. It will stand as his enduring gift to the world. Kay also made many contributions to science, including discovering the orchids Lepanthes kayii and Lepanthopsis kayii, which are named after him. He also rediscovered the Rio Faisanes stubfoot toad (Atelopus coynei), thought to be extinct for decades. Kay even made contributions in the field of physics — describing, for example, ways to enhance solar cells.

The photographer has more than 16,000 citations on Google Scholar.

Kay’s last message, posted on Facebook and accompanied by an image of treehoppers, was simple yet heartbreaking: “I had a wonderful life but much more to learn. All the best for the future of Ecuador and this wonderful planet. Yours, Andreas.”

Here is a small selection of Kay’s breathtaking work. You can learn more about him at andreaskay.org.

The nymphs of these pretty stink bugs like to feed on the stems of plants, but also serve as a buffet for ants, who have learned to tap their antennae on the bugs’ abdomens. This causes E. rufomarginata to release honeydew, a sweet, sticky excretion that ants find delicious.

This arachnid doesn’t feel real. It looks almost exactly like a cartoon rabbit, yet from another angle it also resembles a dog's face. The bunny harvestman is not technically a spider; it’s in the order Opiliones, the same as daddy longlegs. No one is really sure why the harvestman looks this way, but one theory, proposed by Kay, is that it can make the little arachnid appear bigger.

These cuddling amphibians are actually making more glassfrogs. It’s a type of mating behavior called amplexus, in which males grasp females from behind and fertilize the female’s eggs as she spawns them. The males also have sharp humeral spines on their upper arms that they use to fight off competition. It’s possible to see the glassfrog’s bones and intestines through the skin, hence the name.

Even though this brightly colored cicada is only 5 centimeters long, it’s as loud as a chainsaw, according to Kay, and they start their noise-making at dawn. It’s so loud and annoying that it apparently drowns out the sounds of birds, causing certain avian species to vocalize with less frequency or change the amplitude of their songs. Talk about a rude neighbor!

As the name implies, this treehopper evolved to mimic ants, which helps it avoid certain predators. The nasty-looking spines resemble the stingers of certain aggressive ant species. Even the fact that the ant-shaped protrusions are facing backwards is advantageous. As the treehopper moves away, it resembles an ant in an agitated, defensive posture, sure to freak out any hungry would-be snackers.

Beetles in this genus often resemble caterpillar frass, a technical term for insect poop. Looking like droppings can protect these beetles from predators like birds, but it’s not clear why this one is a shiny fuschia color.

This unfortunate weevil picked up a nasty fungus, which acts like a parasite on unsuspecting arthropods. The fungus is sometimes called a “zombie” fungus because it can make sickened insects seek out an ideal spot to die before bursting out of the bug, spreading spores and beginning the cycle anew.

These arachnids are named for the Greek goddess Athena, patron of weaving. It’s appropriate for M. vigorsi, as they rebuild their webs daily. These spiders grow spectacular spines as a deterrent to predators.