Particle Physics Experiment Will Use Ancient Lead From a Roman Shipwreck 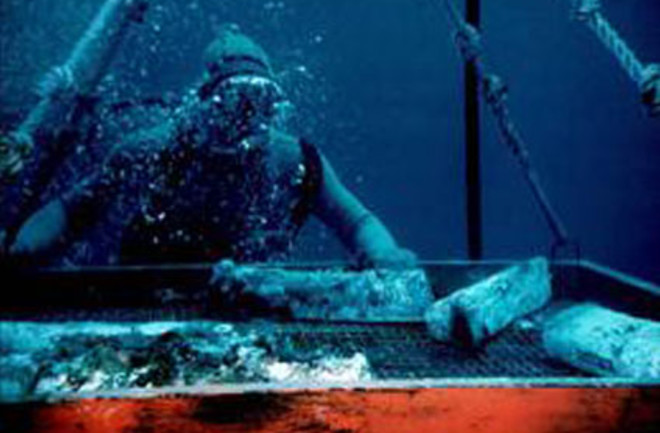 The cargo from a Roman shipsunk off the coast of Sardinia more than 2,000 years ago will finally be put to use--it will become a shield for a neutrino detector. In Italy, 120 lead bricks recovered from the shipwreck will soon be melted to make a protective shield for Italy's new neutrino detector, CUORE (Cryogenic Underground Observatory for Rare Events). The ancient lead, which is useful because it has lost almost all traces of its natural radioactivity, has been transferred from a museum in Sardinia to the national particle physics laboratory at Gran Sasso. After spending two millennia on the seabed, the lead bricks will now be used in an experiment that will take place beneath 4,500 feet of rock. Nature News writes:

Once destined to become water pipes, coins or ammunition for Roman soldiers' slingshots, the metal will instead form part of a cutting-edge experiment to nail down the mass of neutrinos.

From slingshots to particle physics--we humans have come a long way in 2,000 years. CUORE is due to begin operations next year and will be used to investigate neutrinos, particles that have no electric charge and were long thought to have no mass; recent research has proven that the puzzling particles do have mass, but physicists still haven't been able to determine how much. Scientists at CUORE hope to finally estimate the neutrinos' mass by watching as atomic nuclei shed particles through radioactive decay. In order to watch this process, the researchers need to shield their experiment from all external radioactivity. To create this shield, scientists need lead. But freshly mined lead is slightly radioactive and contains an unstable isotope. This isotope, lead-210, gradually decays into more stable isotopes after it's extracted from the ground; its concentration halves every 22 years. That's why physicists are so interested in old lead. As CUORE scientist Ettore Fiorini told Nature:

"It is not unusual for particle physicists to go hunting for low-radioactivity lead," he says. "Metal extracted from roofs in antique churches or from keels of wrecked ships has often been used in experiments."

So when the Roman shipwreck was discovered in 1988 and was found to be full of lead ingots, scientists were thrilled--they would have access to lead whose radioactivity had substantially diminished over the centuries, and the quantity would allow them to fashion a shield more than an inch thick.

A deal was worked out with the Italian museum and a proportion of the ingots were acquired to make the shield. Before the ingots are melted down, their inscriptions, which represent the trademarks of the firms that extracted and traded the lead, will be removed and sent back to the museum for preservation. Still, Donatella Salvi, an archeologist at the Sardinian museum, admits that parting with the ingots has been "painful." Nature News

The ones given to [Italy's National Institute of Nuclear Physics] INFN are the worst-preserved, but are still of exceptional historical value. However, she says she is happy with the collaboration, because physicists are performing important analyses on the lead.

Related Content: DISCOVER: Ice Fishing For Neutrinos From the Middle of the Galaxy

DISCOVER: Neutrinos of the Sea

DISCOVER: Opening an Icy Eye on the Neutrino Sky