Parrotfish sleep in a mosquito net made of mucus 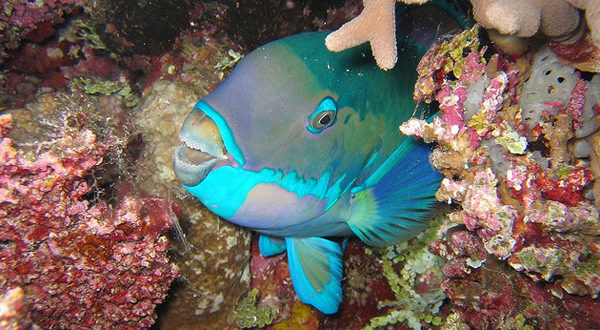 It’s time for bed, and what better way to ensure a comfortable sleep than snuggling into a cocoon of your own mucus? Humans could probably think of some alternatives, but for many coral reef fish, mucus sleeping bags are all part of a good night’s rest. Many species of parrotfish and wrasse belch out their own cocoons every night, covering themselves in under an hour. And Alexandra Grutter from the University of Queensland thinks she knows why – the mucus deters vampires. There are many possible explanations for the cocoons: they’re an early warning system; they act as a dust sheet; they protect the fish from DNA damage caused by sunlight; the list goes on. The most popular theory is that the cocoons protect the fish from predators. It dates back to 1959 when Howard Winn and John Bardach found that three species of mucus-weavers are less often eaten by moray eels than a fourth species that sleeps uncovered. But the duo never considered other differences between the four species and they still found that the eel occasionally ate the allegedly protected individuals. To date, the idea has never been properly tested. Grutter thinks that the mucus protects the sleeping fish, not from the big jaws of hungry eels, but from the little mouthparts of hungry parasites. At night, reef fish are attacked by tiny blood-sucking crustaceans called gnathiid isopods. During the day, cleaner fish help to keep these pests at bay but they don’t work at night. So when darkness falls, the fish wrap themselves in a ‘mosquito net’ of their own making. Grutter collected daisy parrotfishes from the Great Barrier Reef and at night, all the fish dutifully produced cocoons. But half of them were in for a restless night. Grutter pushed them out of their sacs and fished out the mucus, and she did it so gently that none of the fish woke up. She then added gnathiids to each tank and found that the tiny vampires attacked just 10% of the cocooned fish, but virtually all of the unprotected ones. By analysing the chemical content of the scooped mucus, Grutter calculated that making one takes up just 2.5% of the parrotfish’s total energy budget – a small ask for a good night’s sleep. The study raises more questions than it answers. How do fish that sleep without mucus protect themselves? Do they bury themselves in sand, use toxic skin, or sleep in open areas away from gnathiid-infested reefs? And why do the cocoons ward off the gnathiids? Most anti-parasite measures tend to involve chemicals, but Grutter thinks that the mucus is probably more of a physical barrier, like a human mosquito net. Mucus-producing reef fish are the only animals that secrete a covering that wraps their entire body and allows them to sleep. The ability involves special glands in their gills and Grutter says that the evolution of these glands is testament to the pressures that parasites place on their hosts. I’m as big a fan of parasites as the next person but this claim seems a bit far-fetched based on the results of the study. The idea that the mucus is a mosquito net doesn’t disprove any of the other possible functions (as Grutter herself acknowledges). It could provide many benefits to the sleeping fish and the study as it stands says nothing about the pressures exerted by parasites in particular. Reference: Biology Letters http://dx.doi.org/10.1098/rsbl.2010.0916Image: by Richard LingMore on fish: